The News And It's Disturbing

The news about Mogsie has just come in and it's disturbing. I was sitting up in the window having a little bit of a last daylight look around when I saw M coming across the road. The Daddies spotted her and said she looked worried, I think all of our hearts jumped into our chests and I listened closely at the door as they talked.

M said that he'd had to go to the Doctors and the Doctor said it looked very much like he'd been attacked by a Fox, those damn foxes! His tale is very poorly indeed and he's got to go back again tomorrow morning. He's got a collar on as well and is being looked after very very carefully, the poor thing. 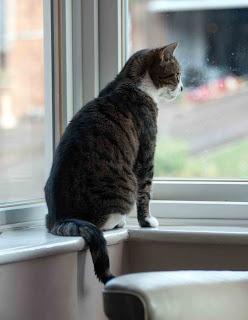 M said they should know tomorrow if he gets to keep his tail! This is all too much to take in. If I could have got out there I would have given M a bit cuddle and asked her to pass it on to Mogsie. She said to be careful if that Fox attacked our big, strong, brave Mogsie during the daylight hours then there is no telling what he might do to the rest of us. I'm going to be keeping an extra close watch out for River to make sure she's OK, I know she can look after herself but then again so can Mogsie and look what happened! This is not on, these foxes need sorting once and for all.