The Most Likely Suspects

M knocked on the door just now to ask Daddy if he'd seen anything, she had some very disturbing news. It appears Mogsie has been attacked! 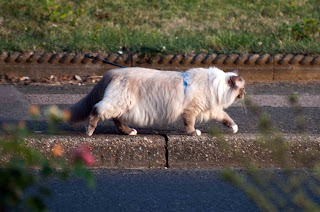 She doesn't know who the assailant is although Foxy Lectar or some wayward people are being fingered as the most likely suspects. I mean it boggles the mind who on earth would attack him? She said he's OK but he just keeps on hiding himself away and is being very quiet, there's some fur missing from his tail as well. I'm glad to see Twizzle is keeping guard and watch over him.

This is terrible news, if it can happen to him it could happen to any of us and out of everyone he's the one that protects us. It's time we banded together to fight this as one, that's it I'm calling a Cat Council Meeting, we need a plan!