Time To Step It Up 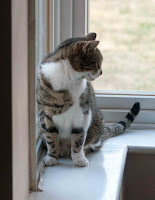 It's my turn on night shift tonight so I spent most of the day asleep so that I would be alert later. I got up when Stay Daddy went to go find Disappears he can be noisy at times, not exactly light of foot when he's in a rush. 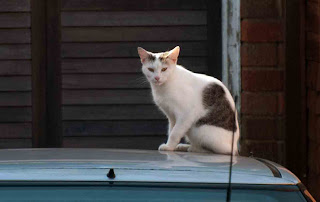 I jumped up in the window to get myself an update from the lighter Naughty Twin who was on night watch last night. I don't know how she does it up all night and all day as still looks as fresh as a daisy.

Yes there had been some disturbances around although minor and the food we'd left out had been taken, so I guess that confirms Foxy is now coming most nights. Daddy said he'd spotted him on Monday night but by the time I went to look he'd run up the road, presumably to terrorise some other cats around here as well.

Spit and Sarah where also taking in the last of the evening light, Sarah engrossed in her dinner, Spit nodded over a you OK. I nodded back in the affirmative. This has knocked us all a bit for six he's not looking quite as relaxed and carefree as he has been since defecting from the New Cat Crew, I think it's time to step it up, we need this nonsense with that scoundrel to come to an end. 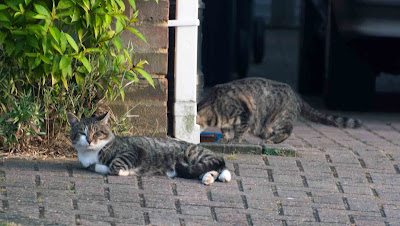