In The Nick Of Time

Sometimes the Daddies have perfect timing. It's a beautiful afternoon and after sleeping away most of the day I fancies a little walk about outside. Just as I was eating a little grass River turned up wanting to play or something, she's also slept away most of the day but typical as soon as I decide I want a wander around she turns up to spoil the peace. The daddies must have noticed and called her in, put her brace on her and took her out the front. Great a bit of peace and the chance to have a little walk around.
It was then that I saw George and Spit squaring up to each other. I don't know what his problem is at the moment but I think he's been pushing his luck a little, last night trying to come in mine and now today George obviously has some beef with him. 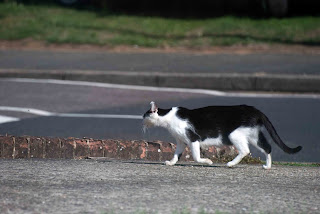 The darker Naughty Twin was also out so I called out to him to ask if he knew what it was all about but he didn't. I also asked if he knew how Mogsie was but he didn't know that either, he did confirm though that the Cat Council meeting is being set up for tomorrow, he said he would let me know the time and venue tomorrow morning.


Cats and Dogs - The Other Side
www.riverssong.net/2013/08/flowers-and-fruit.html