He's Persistent, I'll Give Him That

George is back again. Daddy went out up the shops, came back and went straight into the kitchen, River followed him and then getting bored at not getting a treat went outside and is currently engrossed in sniffing some rubbish so I had a clear seat in the window.

I'd not been up there more that a minute when I saw some movement out of the corner of my eye and turning I saw George sitting by Daddies car.

The window wasn't open but us cats are good at lip reading so I mouthed a hello to him.

He mouthed hello back and said he's come over to see if I wanted to hang out. 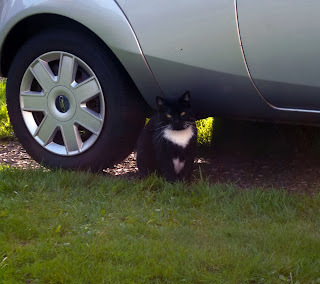 Well after the last time I must admit to being reticent, I'm not about to get my head turned by the first handsome cat that comes my way especially when said cat has let you down very badly before.
Disappears Daddy has a saying, First time shame on them, second time shame on you and I can see what he means but cats just like people can make mistakes, although I admit it's a rarity, and I've been thinking that maybe something might be different this time. I've closed the door on Mogsie so many times and yet I keep on going back to see if there's any movement on the other side of the door and George has only mucked up once on me.

OK I said, but not today though, prove you mean it by coming back tomorrow at noon, then we'll see.

He looked a little disappointed but I don't care, I'm giving him the chance to earn me opening that door again, but so far he's persistent, I'll give him that.