He kept his word. This time!

I'm not one for playing games, they don't work, effective, clear communication I hear from Daddy the whole time and I try to apply it to my life so when George turned up, on time 5 points, I thought I'd grab the bull by the horn and asked him what last Saturday night's kiss was all about?

He told me he'd been thinking about it for a while and then something at the Cat Party just made him drop his inhibitions and go for it.

What am I a target. Don't think I was too impressed at his choice of words but 5 more points for his courage. OK come on lets hang out on the garage roof I suggested and he followed.

I cannot deny I enjoy his company, I always have but these men around here are a bit flickle, between George, Spit and Mogsie a girls gotta be on her toes and pirouetting with sharpened wits about her. 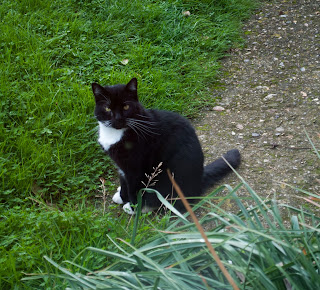 I didn't want to raise the question about where he thought this was going, I certainly didn't need to ask about him and Sarah, Spit's the father so I guess he's not going to be going back there again but I don't really fret about that sort of a situation, if I did I wouldn't be wasting anyone's time, but I was curious.

Leaving um' wanting more, not a game as such but when I felt the conversation was getting into an area I didn't feel I wanted to go yet I made my excuses, thanked him for a lovely time but I was going in now to get a bit of rest.

Same time tomorrow? He called after me.

I don't know what I may be doing but I'll see you around.

I needed some thinking time before I committed myself to anything!