One Of Her Turns

I can hardly believe what I've just seen, River has just has one of her turns, going mad, grabbing Daddies arms and tugging them. I wouldn't have minded but it's really not the sort of behaviour I expect from a lady.

She even tried to justify it by blaming it on the chicken Daddy has just fed up both and I'm afraid I had to reprimand her. It was a bit of a shock for both Daddy and me, I was just getting ready to settle on him and then I get the whole mad-eyed whirling dervish routine.

I hate having to berate her but sometimes you just don't want to see that sort of behaviour and certainly not hear such excuses. Still I think she's got the message as she's settled down now. You'd never see us cats loosing it like that, certainly not over a meal. 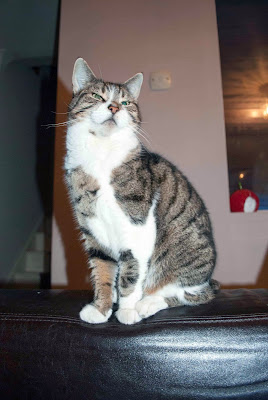 Cats and Dogs - The Other Side
www.riverssong.net/2013/10/the-strongest-doggies-in-whole-world.html