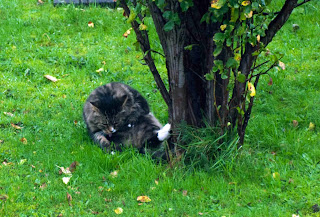 Finally I managed to catch hold of Mogsie, I've been dying to speak to him all day after his spat this morning with George.
He was sitting under his tree, yeah never really thought the lighter Naughty Twin would have a chance of claiming that for herself, practising his high-kicks. Daddy has gone downstairs now but not closed the office window yet so I called over to him to ask him how he was and was everything OK after this mornings little escapade?

He heard me and turned to face me but didn't say anything. I then asked him straight out what his fight with George was all about.

What do you think, was his replied, tone laced with sarcasm.

Now I don't like to be presumptuous but catty powers never let you down, I knew. They'd been fighting over me! 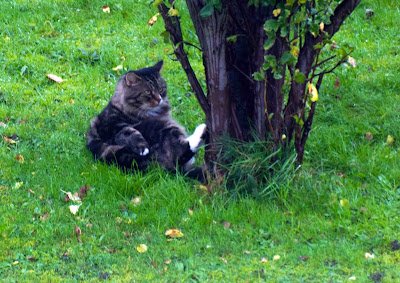