What a night, I am feeling so rough today and by the look of George I'm not the only one. Things didn't go quiet as planning last night, for a start the guest of honour didn't turn up! 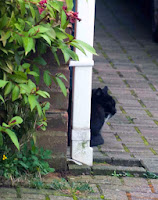 After my little adventure with River last night I had a nice long sleep and woke when I heard Daddy calling out to Emma. He must have seen her walk across the road on her way here and she got waylaid as he went out and gave her some strokes. I think he felt sorry for her outside in the rain, yes RAIN. The one night of the year you don't want it and all that, it poured down so we relocated to the garage.
Maybe that's why Mogsie didn't come, the message may not have got across? Well shortly after Emma turned up, Sarah and the Naughty Twins arrived, followed by George. Bella sent her apologises but she's on baby sitting duty tonight, which I can totally understand and Twizzle, like me never ventures across the road so I assumed she wouldn't be able to make it.

Off we started with the now sodden Dreamies but hey close your eyes and you can imagine them being covered in milk which made the damp taste of slightly more palatable but they really are not the same unless they crunch in your mouth as you chew them.

After a little chatter, I noticed Sarah was acting a strange and asked her what was up? She told me she'd eaten some stuff outside and it was making her feel all light headed but not in a bad way, just a bit relaxed and sleepy. I decided to keep a bit of an eye on her but decided to go over and have a bit of a chat with Emma. She's been keeping herself so much to herself these days that now I had the chance I thought I'd pounce on it and ask her how she was finding it living with Mogsie and Twizzle. Apparently she's still living in the hallway but it suits her. I then heard George and the Naughty Twins beginning to purr in unison, brilliant the parties really starting.

Sarah was gently rocking back and forth a grin all over her face and the Naughty Twins were beginning to swing together, a Cat party is a very personal experience and can affect us cats in different ways. George looked over to me and gave me a grin. I felt my own feet beginning to move and before I knew it I was dancing with Emma around the garage, jumping up on the walls to bounce off, round and round we went, faster and faster in time with the music. The Cat Dance had begun and soon we were all speeding round together apart form Sarah who just sat in the middle staring, the sound of George and the Naughty Twins spread to the rest of us and we all tuned in together, the noise distorted by our running into something reminiscent of the sound a wet finger makes on the top of a wide topped glass when moving around the rim. Oh heady times.

When you get caught up in the Cat Dance time goes and a minute could be a day, a day could be a second, time changes when the Cat Dance takes over, we move as one, the time of the past becomes the time of the now and images of time appeared to me on the walls as I ran. It felt like it was in slow motion but in reality I was travelling at vast speed. Some made sense, some maybe will, time will tell her secrets.

Then bang, a pot was caught by someone of there way around and fell smashing to the floor  We all stood still looking and panting the Cat Dance brought to an abrupt end! George walked straight up to me, kissed me, turned and disappeared through the broken garage door. Emma and the Naughty Twins ran after him without a word, Sarah just sat there grinning at me. 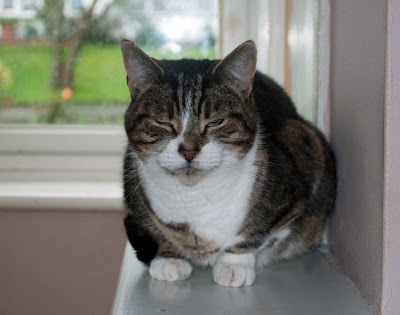