It's Time For Everyone To Batten Down 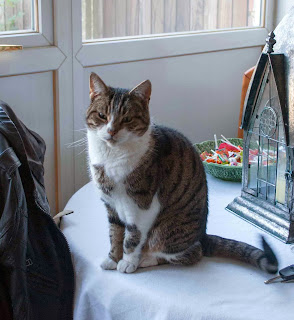 Time changed again last night and I was supposed to be getting an extra hour in bed but oh no not in this house.

Daddy as ever is obsessed with the weather, he's always taken an avid interest in it but this past few days he's been virtually obsessed. He's heard a storms coming and he's been up early this morning preparing out in the garden moving things into the garage, brick weighing down anything he can't move inside and generally fussing in the garden. River I think was supposed to be helping him but in the end just spent her time eating a toilet roll and generally making more of a mess.

I watched from the relative comfort of the table and when he came in he told me what it was like around here the last time such a storm came, the great hurricane of 1987.

Back then he said he'd slept through it all and along with most of the country didn't have any idea it was coming. He had not long started college and in his little green mini attempted to make his way in, although he said he didn't get very far because there was tree's uprooted everywhere. When he said this I started to get very concerned for my friends in the Land of Birds and especially for Craig and his gang, I do hope Squirrel Tree is going to be OK. I'm going to make sure I get out there early to pass the message around, it's time for everyone to batten down! Please universe everyone and everything's going to be OK.


Cats and Dogs - The Other Side
www.riverssong.net/2013/10/ive-earnt-this-yum.html