A Sense Of Hidden Tension in The Air

I thought we were about to have a great big disaster. 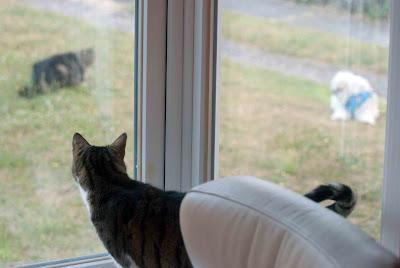 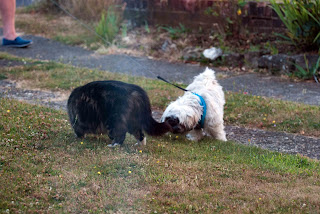 I was sitting up in the window with Stay Daddy and Mogsie came over, I think he wanted a bit of a chat but that was spoilt as soon as River and Disappears turned up. I was very nervous no one messes with Mogsie and River, well she has no fear. 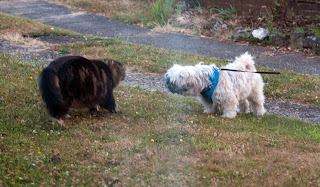 I got up off Daddy to get a close look, the window was open but not enough for me to get out there and break things up if there was a fight. As much as I love Mogsie I've realised I love River to. Oh I would have been so torn as to what to do but Daddy and R were out there so if anything was to happen I guess they would have stepped in.

They just sniffed around each other for a while, all seemed calm but there was a sense of hidden tension in the air. At one point Mogsie hissed at River to get he to back off and to be fair to her she did lay down to let Mogsie know who was boss. I wish she'd do that with me more.

Just after that Daddy and R finished there chat and he told River it was time to come in, all in all not a bad meeting that could have gone so differently. 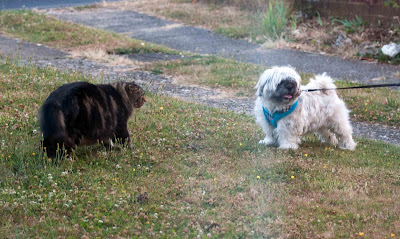 Cats and Dogs - The Other Side
www.riverssong.net/2013/07/his-name-was-mogsie.html