Confirmed An Alliance Has Been Formed 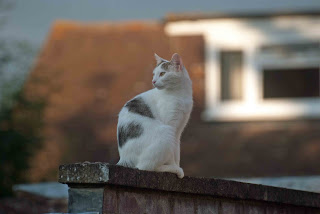 Stay daddy took River out to go fetch Disappears leaving me here on my own with actually was advantageous as I spotted the lighter Naughty Twin sitting on C's garage roof keeping her eyes peeled.
I went out and jumped on the fence and asked her what she was doing.

Keeping a look out, I take it you've heard, came the response

Well Sarah did say something this morning about Foxy Lectar and The New Cat Crew but to be honest  I didn't believe her.

Yes it's true, Foxy has been around over our side of the road and so has Flash this past couple of weeks, we're not sure what they are up to but there's definitively something going on, if one of them is missing one night the other's been coming over. We're all very worried, it appears an alliance has been formed!

Anything I can do? I asked
Yes just keep an eye out and let us know if you see anything.

I told her that I'd seen Flash lurking around AM's and that Daddy had told me that he'd seen Foxy a couple of times but not for the past few nights and she said that she'd report back.

It's all very worrying each of them on their own is bad enough but together now that's a different story completely.