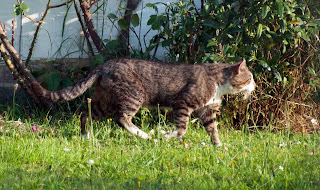 OMG I've just found out what all this business with Flash and Foxy is about.

The daddies were watching TV with River and so the window ledge was free, it's a lovely evening, the windows open and so I decided to sit and have a watch the sun setting. I jumped up to look out and spotted the lighter Naughty Twin sitting by the window.

I'm glad I've caught you I've something to tell you but I'm not sure how to start.

Daddy always says the beginning is a good place.

Spit's been doing some sniffing around, popped over to see Ginger Cat earlier to see if Foxy or Flash had been bothering them.

I was all ears.

He told Spit that they are out to get you.

They are both still smarting about what happened a while back and want revenge. Lil' you're their target. They're coming to get you they've been keeping a bit of a recky on your movements.

Mogsie knows and I'm here to keep a bit of an eye out. Mogsie and George are having a scout of the area. Lil' you must stay in, they are furious and are wanting revenge! You must be careful. We're working on a rota. We know you dealt with them before but Foxy's been working out and he's not alone, Silver Eyes has also been spotted lurking around! 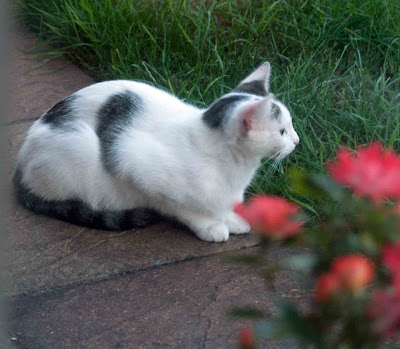