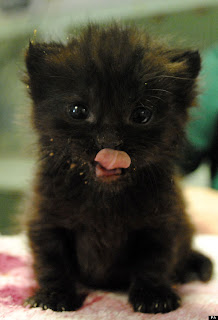 Stay daddy has allowed me in to the office this morning as I gave him that 'I will be good, promise' look and went straight to my chair. I'd settled down nice and quietly when he decided to wake me up to tell me something he'd just read about, if he ever says I disturb him I'll be having something to say about it.

He showed me a picture of this cute little kitten found travelling around on a tube train in London, she was all lost and covered in gunk the poor little thing, he said that he's love her to come live here and as much I really don't want any more invasions I can see why and in this sort of an instance I'll be compliant.

Amazing how much she reminds me of Evie, I thought she'd been reincarnated for a second. Oh yes and they've named her Victoria, maybe that was the tube line she'd been found on.