My second challenge as foretold by The Wiseman was an easy one to spot once it made itself known to me and yes I did know instinctively what to do. 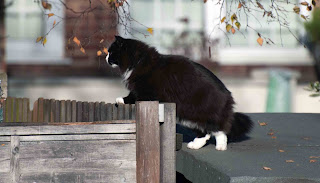 Stay Daddy was out in the garden having a bit of a sleep, River was doing the same from the coolness of inside so I pretty much had a free run of the house. I was upstairs looking out from the bedroom window when I spotted Flash creeping around the sunshine shed, I'm pretty sure I also saw Foxy but by the time I was downstairs out and into the back garden he was gone.

I wasn't going to be having all this bullying and intimidation, not anywhere and especially not in my own home! I didn't really have time to think I was just so affronted that they were coming around during the daylight now that I was out the door before I could even think.

Hey you, I shouted over to Flash, I want a word with you!

Flash looked over his shoulder, he may have been trying to see if his back-up was still there but he wasn't.

STOP! I shouted at him, I will be having a word with you now or a cat slap later, which is it to be?
I don't know where that came from I think I've been watching too much of the Real Housewives of Atlanta with Daddy. He did stop though and I ran up towards the back of the garden where he was standing still.

I've heard a couple of rumours that I want to address. A blank look came back, I'll give him this he's good at playing poker.

I hear you and Foxy Lectar think you can come around here acting all sneaky and trying to stir up some trouble. If you have an issue with me let's deal with it now and...

I looked towards the sunshine shed to see if Foxy was there. He wasn't.

... if you want you're little friend to join us he's more than welcome.

At that point two ears popped up and he jumped up on the shed but didn't make any moves towards me.
Right, I swallowed down, I was nervous but I wasn't going to show it, courage, courage, courage.

Anything you two want to say? I looked at each of them in turn.

Foxy snarled at me, I thought he was going to jump but he didn't. Flash finally opened his mouth.

You, he growled, you are nothing.

What! Went through my mind.

What! came out of my mouth. I am nothing! Let me tell you, I was channelling those housewives again. YOU TWO ARE NOTHING. You think you intimidate me, I slapped you down before and I'm gonna slap you down EVER time you come around. Who's first?

Tick, tick tick, boy time went slow even though it was seconds.

Now let me tell you two something else. You ever come around here in anything other than peace again  and I won't be waiting for rumours I shall be stepping right up in your faces. DO YOU UNDERSTAND ME, Is. It. Clear. Enough. For. You. Two?

Flash flashed one tooth at me, I turned to look at Foxy to find the shed was empty, he'd gone.

Well? I turned back to Flash.

The reason why you have to hang around on your own it because you are a repulsive, snivelling, snidy bitter cat who needs to look at himself and the reasons why he's so alone, once you've done that you may just come to some conclusions that will benefit your life, until that time, do one.

And much to mu surprise he did. Phew hopefully that's that done but you can never be sure with those two but hopefully they'll leave us alone now.

Now what's next I'm all fired up and ready to get on with it, one more challenge to go, the purpose behind all these challenges I have no idea but there's some reason that much I'm sure of I think I'll head up to the house of glass and have a think about it, see if I can pick anything up from The Wiseman about it. 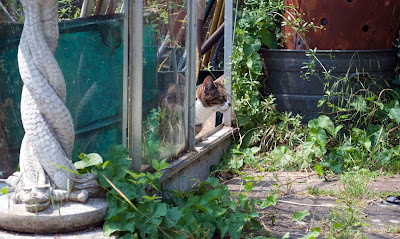