As Darkness Falls The Cats Of Catworld Are Gathering

As darkness falls the cats of Catworld are gathering. I first spotted Mogsie hiding underneath a car over by E's house, it caught my attention as it's not the usual sort of thing he would do


As I sat there trying to work out what he was doing the lighter Naughty Twin came by and filled me in, this was the plan that had been devised to capture or at least scare Foxy Lectar off with such a fright that he would never come around these parts again.

I started to tell her about the terrible thing that had happened to The Wiseman but she interrupted me, she said she'd been around first thing this morning and had seen what had happened to him and reported back to the others, her feelings were the same as mine, Foxy was to blame.

Mogsie she said was very concerned, it appeared I was being targeted again by him and he was upping his game, they didn't know what he was capable off.

I said I wanted in but the lighter Naughty Twin was insistent that I would be putting myself in too much danger and that all the cats of Catworld were in agreement it would be too perilous for me to be out after dark. 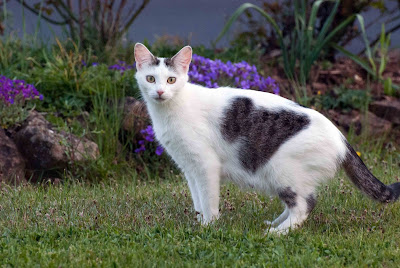 She was to be stationed between ours and C's house, George was going to be hiding under R's car, with that she indicated to his position over the road, he saw us watching and looking back nodded his head. I smiled back, no matter what personal issues us cats may have we always band together in times of crisis, Mogsie was to remain hidden over the road.

She said that it didn't matter if they had to get together every night until Foxy turned up but they were determined to repay what I had done before. I looked at her my eyes widening, yes she said everyone knew what I had done that night, the other side of the tunnel, the last night that Troy Lamore was here.

When Foxy turned up it was to be a co-ordinated attack from every possible angle. Her brother the darker Naughty Twin was, she said, to be stationed at the corner of the road and when he passed he would follow and give a sign that he was here.

Every angle will be covered, last time you stood up, this time we all stand up together!

Fair brought a tear to my eye. 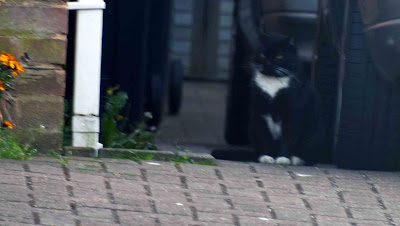