If I hadn't seen it with my own eyes I wouldn't have believed it. 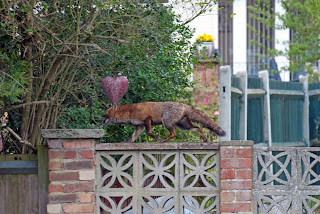 The daddies and River were watching the Middle on TV, Stay's neck is playing him up again and he's feeling in one of those quiet moods. I would have joined them but I've seen that episode so I was sitting up on the table amongst the ever growing bric-a-brac when I saw Foxy Lectar jumping onto our back wall.

I froze, it's been a very long time since I've seen him in the day and it was only this morning that the lighter Naughty Twin told me that they were limiting some of the night watches because he's not been spotted and here he was in broad daylight. 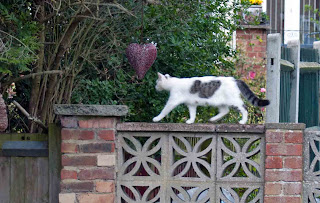 Daddy spotted him as well and he shouted out to Disappears, Make sure River doesn't go out and then ran up to the back window. He was just in time to see Foxy running all the way along the back nearly knocking the Swinging Heart of Love flying. For a second I thought he was going to jump into our garden so I could see why daddy was so concerned about River running out there but I need not worry he was being chased, yes chased by the lighter Naughty Twin!

Our hero, I'm going to spread the word she needs an award for her daylight bravery.