Coming Out, Loud And Proud 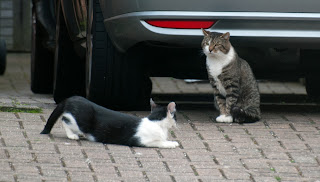 Well it just goes to show you never really know someone until you know them. I was sitting down with River and the daddies, they were all just chatting away when Disappear said;

Look at them and pointed over the road.

Spit was hanging out with the Naughty Twins, the darker Naughty Twin was putting on a display of some sort for Spit, all very curious so we all sat there watching. It dawned on me when he started rolling out on his back and putting his behind in the air what was happening.

Spit moved over to him and then my catty intuition was proven to be as sharp as ever, in front of the whole world to see the darker Naughty Twin came out, loud and proud.

I'm very pleased for him of course but I wasn't expecting it to be so public.

I don't think Sarah was either as she came over and along with the lighter Naughty Twin proceeded to attack Spit, guess she's they are just jealous that Spit has now moved on from them both. 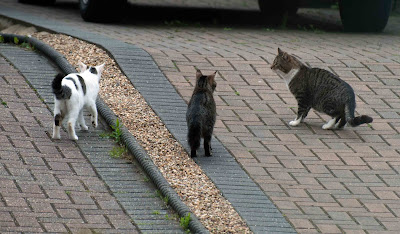