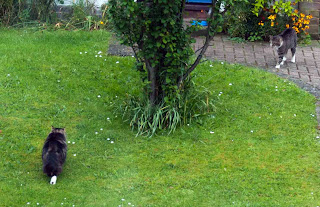 Ummm there is definitely something going on that I don't know about. All this strange behaviour recently with Sarah and the Naughty Twins going off in little huddles and then acting as if they were going to war. The fight between Spit, Sarah and the lighter Naughty Twin over his relationship with the darker Naughty Twin. Then Sarah flirting with Doublay in front of George the other week and today there's been Doublay and his quiet frankly noisy behaviour over the road, something is going on that I don't understand.

I'm keeping a note of all these events and there's another to add to the list, Mogsie and Spit have just slugged it out. Spit came around from around the back of Mogsie and Twizzles place and decided to sit next to R's car but blocking the main walk way through to the back. Mogsie came from somewhere over this side of the road quiet happily sauntering along when he spotted Spit, Spit spotted Mogsie and as Mogsie was continuing on his way got up to stand in his way. Oh well you can guess what happened then, everyone's gander was up, cats screaming and fur went flying, great big chunks of it!

After about a minute of one of the most vicious cat fights I've ever seen they both just sat there breathing heavily next to each other. Mogsie eventually got up and walked around the back, shortly after he left Spit also got up and crossed over to this side of the road. The problem is I don't know who won that fight. I don't like the smell in the air, no I don't like it at all. 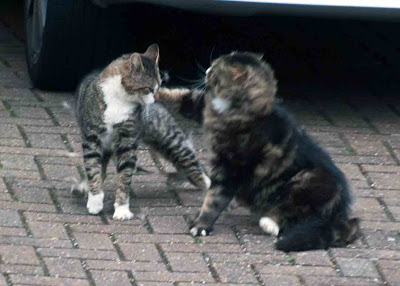