What I've just seen has shocked me to my core!

I was up with daddy in the office, he was on the phone, I was on the window ledge looking out when I saw both the Naughty Twins, Sarah, Button and Spit all gathering on the pathway opposite. It's rare unless there's a cat council meeting that so many of us will gather in the same place at the same time so my radar was up. 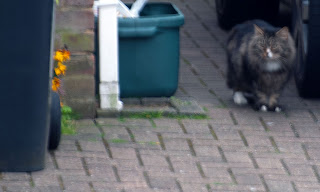 Sarah and the lighter Naughty Twin then swiped out at Spit who ran back a couple of paces to safety and then turned around. Button and the darker Naughty Twin then joined them and all four attacked Spit, chasing him three houses up and back down again. He was standing his ground but with so many of them he didn't really stand much of a chance, it was a horrendous attack.

They were back where then began, by R's car, and it looked like it was going to be the biggest cat fight of the year when Mogsie swaggered up the side of his house and they all dispersed. I don't know what Spit has done to warrant such action but at the moment I feel very let down by the behaviour of certain individuals.