Twizzle is out for a walk and Mogsie is being very protective over her. He kept on eye on her the entire time she was out the front, I'm sure R would have been protection enough if Spit had come around but hey that's Mogsie for you. 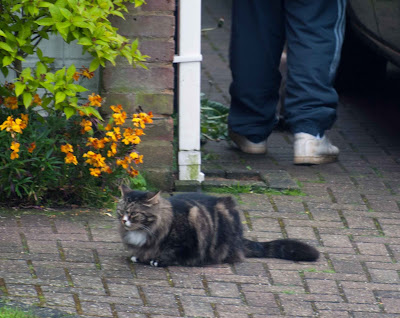 When Twizzle went around the back Mogsie moved his position to front pathway. Just about 2 minutes after Mogsie moved Spit walked from around the back he must have been watching to make sure the coast was clear. Sarah resting under the car looked on with a mixture of shock and surprise, I'm guessing she knows all about the fight earlier.

Spit spotted Mogsie way before Mogsie spotted Spit and he defiantly walked right to the middle of the lawn at the highest position and just looked down at him. 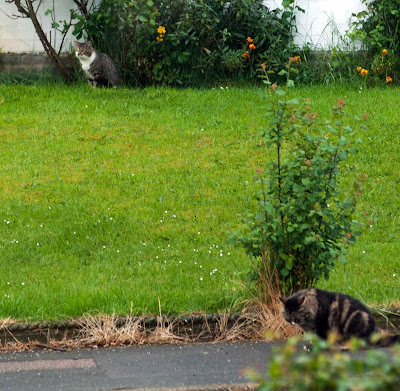 When Mogsie did spot him he just turned his head and didn't move his body one inch, that's my Mogsie acting all nonchalant, I however was sitting there almost with my heart in my mouth. What was going to happen, ding, ding, round two?

But no after a 5 minute stand off with neither of them moving Mogsie started to make a move towards Sarah still sitting terrified under the car. Spit then moved position, coming over this side of the road. 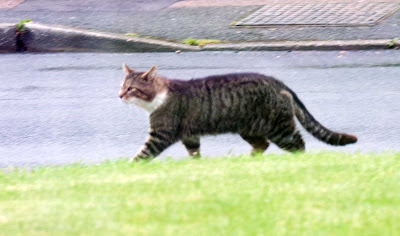 What on earth is going on there, I never thought I'd see Mogsie backing down from a fight but it seems so? Or I should say seemed so, he was being strategic moving to the higher ground position on top of the garage watching Spits every move. Something tells me this isn't over with yet! 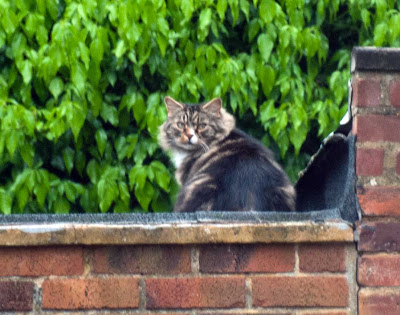