It's Not Her Fault

I don't know why the Daddies give River chicken first thing in the morning, they know it makes her go hyper.

She was in a bit of an excitable mood anyway chasing me around all over the place, in the end I'd had enough and went outside but she followed. I went up into Squirrel Tree to see if Craig was around but he wasn't so I then decided to have a walk around C's garden and see if I could spot any clues that the New Cat Crew had been around.

Just as I was sniffing around I heard a right hullabaloo from our garden. There River was running around in circles barking her head off,, there Stay Daddy was running around after her calling out in the loudest whisper he could to come to him but she was having none of it.

He did eventually catch her and took her inside, even though he said she was being very naughty he really doesn't know how to tell us off, I think it breaks his heart to ever scold us.

He took her upstairs out of the way and I went to see how everything was. Daddy was relaxing in the bath and River was just whining as she does. I tried to say to her that if she doesn't want to be discovered when she makes a secret break for it that she must be quiet or she'll be discovered but I don't think she got it, she just wasn't listening, to intent on trying to get up on the bed where I was.

I don't blame her, it;s the Daddies fault. No chicken first thing in the morning! 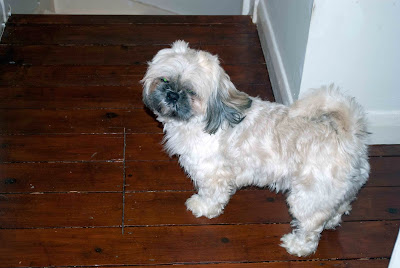 Cats and Dogs - The Other Side
www.riverssong.net/2013/12/he-says-naughty-i-say-clever.html