Yes, Thank You I Know How To Hide Under A Car! 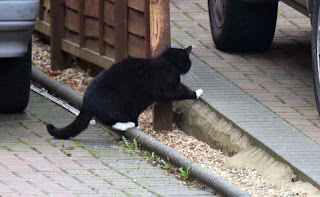 Saturday morning and I'd been hoping for peace but no that was not to be, River was up and in playful mood. The Daddies managed to grab her and keep her occupied so that I could have some alone time in the window which is when I saw George acting very strangely.

He kept on looking under the cars and moving between a couple of them. I was trying to work out what he was doing when I saw the lighter Naughty Twin come running from around the back of Mogsie's house. She spotted me and came running over.
News on the cat information network had come through that Flash and Foxy may be on the attack tonight and everyone was preparing. 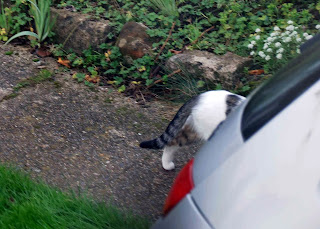 I asked where the information had come from and she said that Ginger cat had heard some rumblings and contacted Mogsie and he'd come up with a plan. As soon as it was dark he wanted all of us to hide under any cars, keep out of sight and when they appeared we could all pounce. Oh my heart was pumping, I hate this sort of thing but in times of trouble we must not run, we must work together as a common collective, putting aside our own views.

Well OK then if that's what's needed to teach them a lesson, that's what we must do.

The lighter Naughty Twin then dived under Daddies car and said that was the way to hide.

Yes, thank you but I know how to hide under a car!