That Dog Won't Stop Me

After the events of this morning I've been all over the place keeping a watch out. When I did manage to get past River I went out and managed to catch hold of Sarah. She said she'd not seen either George or Mogsie as they had both gone off together first thing and weren't back yet but they looked very serious, she thought they may have been going off to see Ginger Cat but she couldn't be sure.

I thanked her again for all her help this morning and if she was OK. She said she was nervous about standing up to him but that we must stand together.

He does seem to have it in for you especially, she said.

I know, I replied

With that it began to rain again so we both ran off to keep dry.

I went and sat upstairs looking out for any signs of movement but nothing so in the end I came back down to join River and the Daddies watching some crap on TV when I heard River whinging in the window. 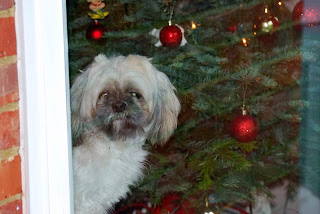 Oh she can be a funny little thing, ever since the Christmas Tree's gone up she seems to lost any sense and whenever she goes up onto the ledge she stuck in forward position only. The Daddies have been encouraging her to turn around or too back up but she only gets so far before she starts whinging and one of them has to go and give her a bit of a helping hand.

This was different though and I jumped up on the ledge and there outside on C's pathway was Chameleon staring in. I looked to see if anyone was around but Catworld was empty.

He just smiled at me and licked his lips in a menacing way, totally undeterred by this mornings events, the he opened his mouth.

Just to let you know, that dog won't stop me! 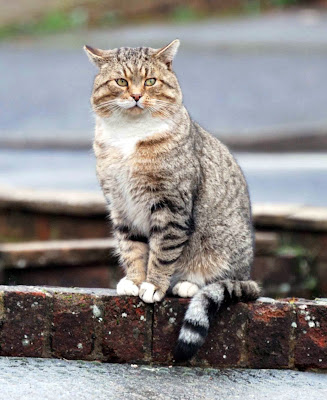 Cats and Dogs - The Other Side
www.riverssong.net/2013/12/that-cat-wants-to-play.html