That's When It Changed - He Made His Move 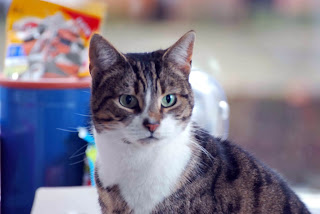 Sunday morning and what I thought was a rainy but peaceful one turned out to be anything other than peaceful.

It started off pretty normal, I came down with Stay and River while Disappears Daddy had a little extra lay-in, River chased me for a while, Stay Daddy bribed her with treats to keep her away to let me eat in peace and then we all settled down just doing our own thing. 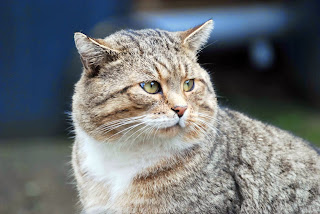 Disappears Daddy came down, chatted with Stay for a while, played with River to wear her out and to give her some cardiovascular exercise and then Stay said he was going for a bathe. Up he went and Disappears went into the kitchen to make himself a drink, that's when it changed.

Who is that cat? Disappears called up and Stay came running back down.

Oh that's Chameleon, I've not seen him for ages, he replied.
What!

I jumped up on the side and looked out and there he was just staring back at me, an evil look on his face he grinned and mouthed something at me that I couldn't quiet work out before licking his lips. 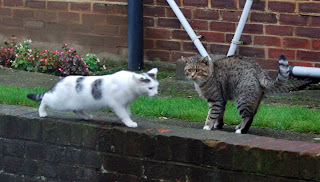 All of a sudden I saw a flash of white, it was the lighter Naughty Twin running up the wall towards him. Chameleon arched his back as if ready to attack but the lighter Naughty Twin was not deterred. She's pretty fearless that one. I wanted to get out to help but River had joined and was barking at Stay's feet, blocking me, I could only look on helpless.

Then from under Daddies car Sarah appeared, they both stood up to him and were not intimidated at all. Chameleon did not look happy, as if to show she really wasn't bothered by him the lighter Naughty Twin then sat down right in front of Chameleon, he looked my way and mouthed something again that I made as as you'll wait, before running off.

I thanked them both through the window and nodded down and shrugged my shoulders so they could make out that River had me corned. The lighter Naughty Twin smiled back, I think she actually enjoyed it! 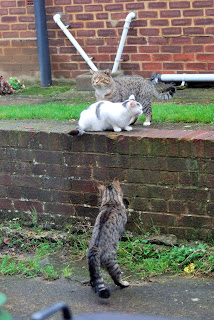