Today is one of those days, full of tension.

It started fair enough, normal morning routine, we all get up River chases me, I scream at her to leave me alone I'm trying to wake up, both the Daddies leave, Stay's the only one who returns. Then it all changed.

Stay was upstairs with River, I had the run of the ground floor and a perfect view out of the window over the other side of the road. I've been waiting for anyone to turn up to try and find out what was happening. 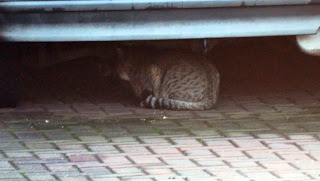 I had to wait until nearly 10 before any sign of anyone, then like buses three come at once. M opened her front door and Sarah quickly followed by Chameleon and that other cat that Twizzle was talking about that looks like Sarah came running out from the garage roof and tried to make a break in the front door. M managed to prevent them from gaining entry with swift foot action. Don't get me wrong she didn't kicked them but used a blocking move that any footballer would have been proud of, then all three of them ran under R's car.

Tense moment number two came when a man turned up to fix Daddies car. He was two hours two early as I later on found out. Daddy was busy in our office and didn't get to answer the door. I found out about it when I heard him being assertive on the phone later on. Apparently, according to Daddy they had confirmed three times that they would be here between 1 and 5 and yet had turned up just past 11. From what I can work out they wanted him to bring it to them later on in the week and from what I heard it was a firm NO.

At the originally agreed allotted time they turned back up and are now currently fixing it.

I guess it's one of those that you should have stayed in bed and not wanted to witness another tense moment I've decided to do just that. Ah peace! 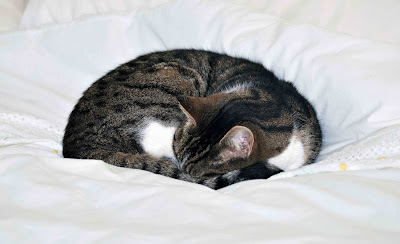 Cats and Dogs - The Other Side
www.riverssong.net/2013/12/car-doctor.html