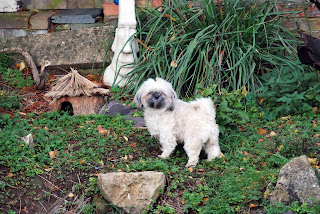 There's some occasions where River's inquisitive nature is a gift from the universe. I was asleep in bed upstairs, Daddy had shut the door to get on with things and it's way too cold for me to be outside today. I woke up and everything was covered white, I thought it was snow at first but when the sun came up I saw it was frost, brrr.

Anyway, there I was sleeping away when bark, bark, bark, bark, bark woke me up. She's been on the ball recently so as soon as I heard her I jumped up onto the window and looked out just in time to catch a tiny glimpse of Flash's tail disappearing into Squirrel Tree.
By the time Daddy was out calling River in and so I ran into the office and luckily George and the lighter Naughty Twin were out there. The window was open so I called over what I had seen. George just nodded by the lighter Naughty Twin was apoplectic and started clawing away at the floor, sharpening those claws.

After I passes the message I went back to keep a closer eye on Squirrel Tree. I must try and catch Craig see if he's over heard anything. 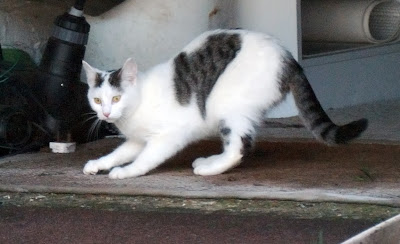 Cats and Dogs - The Other Side
www.riverssong.net/2013/12/make-him-play-with-me.html