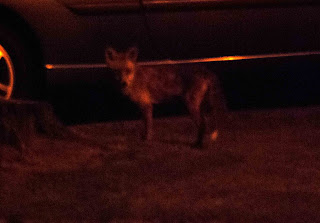 They're watching some show that apparently is hilarious according to the laughter that is coming from their mouths. You'd think at this time of the night they'd be attempting to keep the noise down but oh no, I never realised some drunk school boy being sick over some girls little brother was so amusing but yes according to them it is.

Anyway I digress while they're laughing I'm watching, watching that scoundrel Foxy Lectar creeping around over the road, attempting to tamper with someone's car, is there no depths to his evilness?