The News Is Out

Well the news is out about this mornings liaison between Spit and Sarah, the darker Naughty Twin does not look happy.

I was sitting in the window with Stay daddy, there's been problems with an Internet connection in here and all hell had been breaking out with him and the man on the other side of the phone and now finally some sense of calm had descended now the strip had been torn off so I was enjoying the peace when I spotted the darker Naughty Twin striding across the road.

Sarah and Mogsie were just hanging out having a little clean on the pathway and they both spotted him at roughly the same time. Sarah's face was a picture, if she's been near a toilet I swear she would have crapped herself. Mogsie could tell something was up and looked at the darker Naughty Twin with a bit of a look of surprise on his face at the way he was pacing forward. 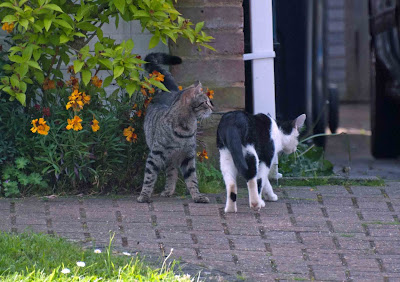