Ah So You Come To See Yourself

It works, it works! I've been deep in thought this last day or so about the re-appearance of Flash, things going through my mind such as why is he back? Why now? Has he been here before but I've just not seen him? In the end was it was just doing my head in so I thought a trip to The Wiseman was in order.

I've been up there since Foxy attacked him but I've never dared to consult with him in case I got confirmation that he could no longer give us his wise words and that would be just too much to bear so it was with trepidation that I approached.

The daddies were out and River was asleep in the window so I knew there was a good chance of not being disturbed.

I sat before him and tried to tune in.

Ah so you come to see yourself

OMG my heart leapt he was talking to me. He was OK and I asked him but no response so I concentrated on my question.

The answer that came back told me to not jump to conclusions and to watch carefully for any suspicious behaviour. Good advice as ever, I'm so glad The Wiseman is OK, it's such a relief. 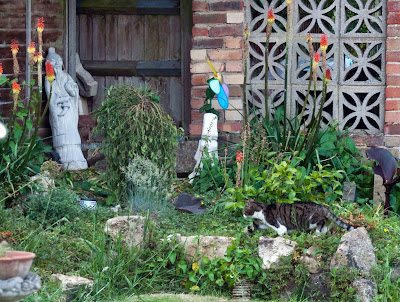