Things still aren't right between Spit and Mogsie. Spit walked up E's pathway, nothing unusual in that, until he reached her plants when he sat down confidently staring down the pathway.

About 2 minutes later Mogsie rounded the corner, I've got a feeling that Mogsie was trying to follow him using all the best investigation techniques, from a distance. however he was busted. Spit must have known that he was being followed, Mogsie paused for a second, a bit thrown off I think that he was caught, then carried on home as if that was his purpose all along. No fighting but plenty of cut eye between them both. 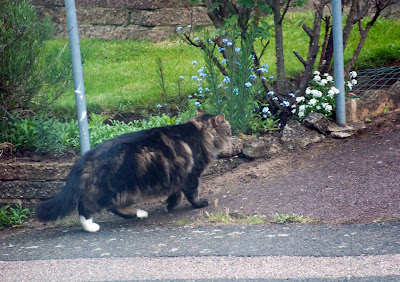