I'd Never Thought Of It That Way Before

I've just had a very interesting conversation with the lighter Naughty Twin. 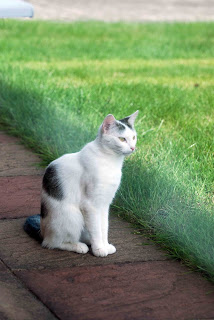 I was sitting down with the daddies, River had been chasing me around for a while and Disappears daddy finally grabbed her to keep her occupied, so I managed to go have a drink from my water fountain and have a sit with Stay daddy up in the window when I spotted her just taking in the evening air.
It's been a hot day so the window was open so we could have a proper conversation Stay was watching TV some show about people who live up North, near his friend WHS, so I knew he wouldn't be ear wigging.

He does like you you know, she said and nodded over to Mogsie sitting on the other side of the road.

He's a complicated man, a man with his pride and more sensitive that he let's on.

I know, I replied

The thing is he's had a hard past, before he went to live with M and R he was pretty settled and then one day bam he was on his own, abandoned.

I carried on looking at her very intrigued. I knew he's had a hard life before he was saved by M and R but this was information in a depth that I hadn't heard before.

That sort of thing can make you very insecure having your world pulled from out underneath your feet. Makes it hard to trust, makes you very independent.

I carried on watching her looking at Mogsie, she then turned to me.

Give him a chance, he's good a good heart.

That much I already knew.

He'll come good in the end just give him time.

And with that she was off, I'd never thought of it that way before and I looked over to Mogsie still sitting basking in the last warmth of the day, my heart did a little flutter and I swear if cats could cry my cheek would be wet. 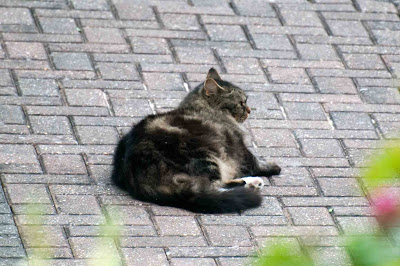