Well Mogsie has finally stopped avoiding me or just waving at me from the other side of the road, today actually came over to talk to me.

I was sitting downstairs with Daddy, River was running around in the back garden chasing her tail or something so I took the chance to sit downstairs during the day, a bit of a rarity these days, when I spotted him wandering around over E's.

The window was open and so I called out to him, I'd had enough of having all this patience, and miraculously he came straight over.

Yeah, yeah full of apologies and all that he was. We chatted for a while, not being able to say too much as Daddy was sitting there and although he can't speak cat, even though he thinks he can, I didn't want to discuss my personal business in front of him and also I thought sometimes it's best to leave a suitor wanting more so I did. Just as he was getting into it I excused myself, he did look surprised, well what did he expect? 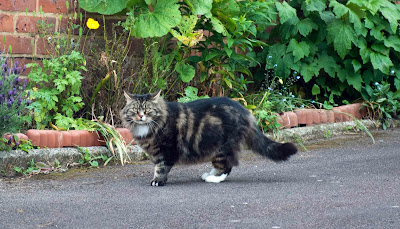