After George's visit I decided to remain in the window to make sure that I caught him as soon as I could. Disappears Daddy isn't very well and so is home today and so between him and Stay they were managing to keep River away from chasing me all around the house so I felt confident I could safely stay downstairs without having to watch my back all the time and concentrate on trying to stop him.

He strode across the road after coming from E's back garden with his usual swagger, swoon, heading in the direction of George's.

Daddy has the window open so I called out to him and he came over and told me that as from 11 this morning all cats were to move to their allocated posts.

The lighter Naughty Twin was going to keep a watch over this side of the road from his place and the darker Naughty Twin would join her although would be moved to any position that was needed when required, Twizzle was keeping guard over the back gardens, he said he'd like me to watch his house from my view, Sarah and Bella were keeping an eye on the lower part of Catworld and he and George were doing a constant walkabout around the perimeter.

I asked if he had a plan, he just winked at me and said he was working on it. Phwoar I love it when Mogsie takes control. 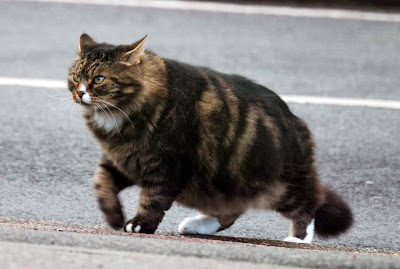