I Thought We'd Got Away With It

I thought we'd got away with it, a whole day without any Foxy or New Cat Crew drama, but oh no.

I was up early, the early bird catches the worm and all that, it was still dark when I went to my post. I had to use the upstairs as the blinds were closed downstairs, but that didn't matter, in some ways I get a much better view from up here.

I spotted the lighter Naughty Twin out on the garage roof, another early riser, but no one else until mid morning, I guess everyone had been up late.

Mogsie waked by and asked how I was and had I noticed anything out of the ordinary. I was glad to admit nothing. He said it had been a quiet night over the other side of the road to. So far so good. I asked him what happened yesterday with the darker Naughty Twin spotting Flash and he said by the time he'd got there Flash had gone but he thought they might have made a secret camp in one of the gardens at the back of us.

The rest of the day passed pretty much as yesterday, George and Mogsie passing back and forth, the Naughty Twins keeping watch over here and me going between the back and front windows.

I thought that was it when it started to get dark at about 4 but then I saw Flash, looking right in at me. I had no idea how long he had been there but he did not look happy.

I stared back although it didn't seem to faze him. Luckily River had just come back in or I would have been right out there, as much as we have our ups and downs if anyone goes for her I'll have them.

After a few minutes he strode of with a touch of arrogance in his walk up into Squirrel Tree.

I managed to catch George and told him, he said he would pass the news on to everyone. What on earth is their game, they seem to have some sort of a strategy although what it could be I have no idea! 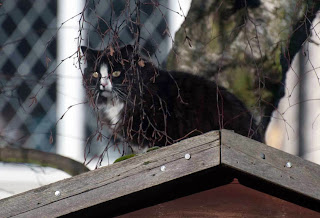