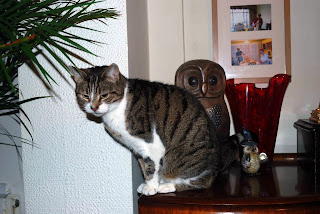 So another late night last night. The Daddies took River out to go and see the girl, it was her birthday, I'll say Happy Birthday when I see her but at the moment I have more pressing matters to contend with.
As the Daddies went out I saw the lighter Naughty Twin sitting on the roof of the car, she was waiting for me with a message from Mogsie to be careful. Ginger Cat passed a message that he'd heard that Foxy and the New Cat Crew where not working alone.

Yes, Silver Eyes was back.

I could hardly believe my ears but she assured me that Silver Eyes had also been spotted. This was getting very serious now, it seemed like there was a full recruitment drive going on. I guess there is strength in numbers but there's only so many of us in this Catworld
.
Was there a plan I asked and the lighter Naughty Twin said yes there was but Mogsie wasn't ready to divulge it yet, but as soon as things had been confirmed up he would call a Cat Council meeting.

With that she was off, leaving me to my own thoughts. I was so glad when River and the Daddies came home so I wasn't here on my own. 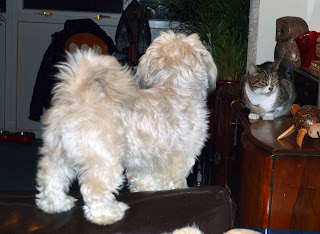 I didn't sleep well and was up early, trying to work out what Mogsie could be conjuring up when River came bounding over. Of course I tried to warn her but she was having none of it.
How on earth can someone so small be so awake, so early? I'm off while I've still got a clear route. 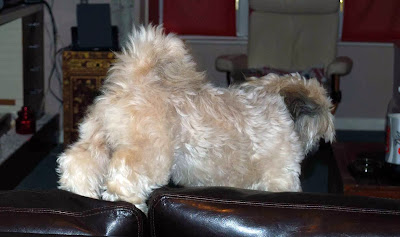 Cats and Dogs - The Other Side
www.riverssong.net/2014/01/wait-for-me.html