George has just had a lucky escape.
Daddy has taken down the Christmas Tree, thank goodness it means I can finally get up in the front window and have an unrestricted view of everything that's going on. River took first go, it's best to let her she won't stop on until she's got to wherever it is that she wants to go, when she went out into the back garden I got up there just in time to see George making his was over to visit Emma who was having a little Sunday morning rest under R's car.

He didn't use his Green Cross Code though and narrowly avoided being squashed by a car coming up the road. The most irking thing about it was though that he didn't seem in the slightest bothered by his near miss, just carrying on as if nothing had happened.

I shall be having a stiff word with him later! 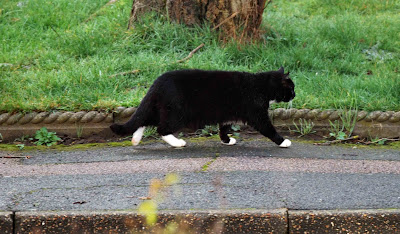