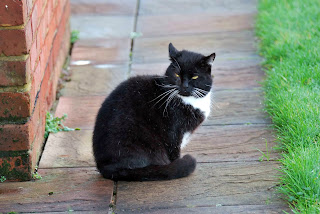 True to his word George followed the trail left by Foxy on Saturday night all the way down the road towards the tunnel.
It started to rain and then he lost the scent, he said, when he popped by first thing this morning to let me know how he'd got on.

Apparently there was evidence and signs all the way down the road, fox holes dug randomly in gardens, so even though he'd lost the scent he knew he was on the right track.

He said he'd reported his finding back to Mogsie and that he was coordinating a look out system and would be over later on to let me know what was required of me. A cat council meeting would have usually be called in such a state of emergency but this time we must act as if nothing was going on.

We'd scared them off before by luring them into a trap but that had only worked for a few weeks, so this time we needed a more permanent solution.

I said to George that I was a little bit worried that maybe Foxy had done this to lure whoever followed into a trap but George assured me that he was too clever to fall for such a ruse and that even though foxes can be sly and cunning, it's no match for the sheer brains of a cat. Very true!