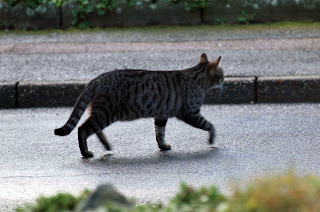 It had been a quiet morning and afternoon, until now!
I spotted Mogsie and George walking around, as arranged, and at about 1 after he'd had his lunch the darker Naughty twin moved from under the car and did a circuit across the road, up AM's pathway and across the back somewhere. 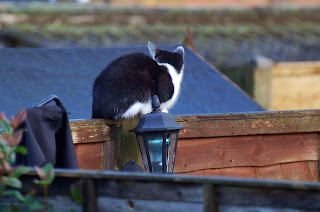 Just now however I spotted Sarah running across the road, she called out had I seen Mogsie or George. I'd not for about 15 minutes but said maybe try the lighter Naughty Twin who was still on the garage roof.

She said, in a rather panicky voice, that she'd just seen Flash hiding in bushes at the back of her house and the darker Naughty Twin was still there keeping a very close eye on him. 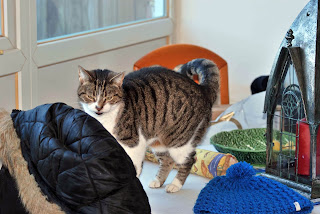 I ran up to the back window, carefully navigating the bric-a-brac on the table to see if I could see Flash. I couldn't but the darker Naughty Twin was as still as a statue. Flash must still be there.
Oh hurry up Mogsie!