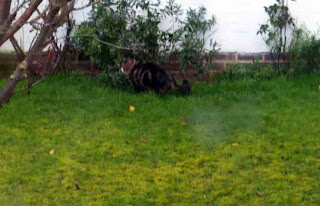 There he is, my love, walking around as strong and brave as ever. I've hardly seen him this past couple of weeks and I have missed him but it's no one's fault. Christmas means I always hibernate in and stay close to the family but this year it's been extra hard, there's been nothing but rain and flooding everywhere.
Daddy says he's never seen anything like it and he's been around for a very long time. I've seen some of the flooding on the news and it looks bad, Daddy said that the bottom of the road under the bridge has been flooded out for days, luckily we live on a hill and are near the top of it so we're OK but there's so many people around here who have been swamped.

No wonder no one's been around as you know us cats hate rain but then again Mogsie is a special kind of cat and it doesn't seem to bother him that much. As least I can still glimpse him from the safety of indoors, oh I can't wait for the Spring, it's gonna be a good one, I can feel it in my catty powers.