She May Know More Than She Thinks She Does

It's amazing how much you can miss out on when you are out of circulation for a while.

Anyway, there I was sitting in the window when the lighter Naughty Twin dropped by. I though just to say happy New Year, but no it was to ask if I was OK. Of course I was, why wouldn't I be? That's when she told me everything that's been going on this past week or so.

Foxy Lectar has been coming around on an almost nightly basis. I didn't have a clue he was back, although now I think about it I did hear Stay Daddy calling out to Disappears Daddy a couple of nights ago to come and have a look out the window about 1am but I didn't really pay it much mind at the time.

I asked if there'd been any sightings of the New Cat Crew and she said as far as she knew none of them had been spotted, that's something I suppose.

I said I'd keep my ears sharp and eyes peeled, I wonder if River has any information, she has been persistent this past couple of weeks going out in the garden all times of the day and night barking and making one of the Daddies having to go out there and chase her in, she may know more than she thinks she does! 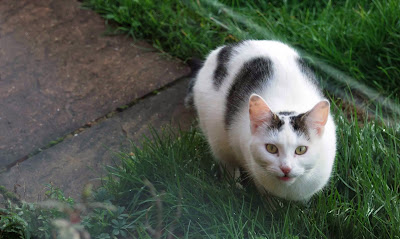