What A Day It's Been, Full Of Visitors!

What a day it's been, full of visitors!

It all started off as a normal Sunday, Stay Daddy got up about 9 which is late for him and then Disappears Daddy got up as well almost straight away. I wasn't that surprised as the sun was out and I heard Daddy say it was going to be the hottest day of the year so far. 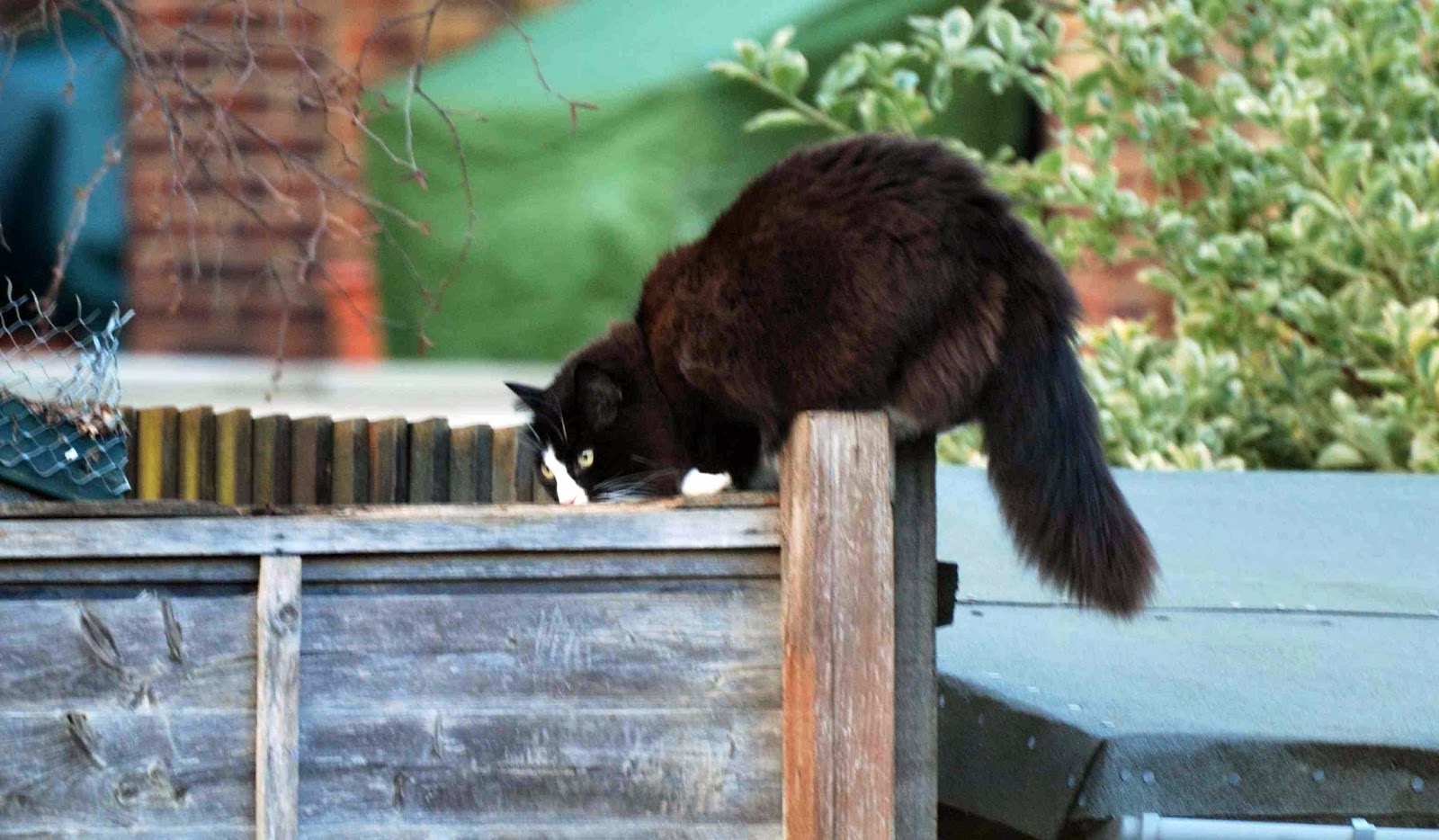 I followed them both down and jumped up on the table and then I spotted our first visitor of the day, Flash!
Well you can image what was going through my mind and I watched him for ages slinking around. I may now be on the other side but it still doesn't stop me from keeping my eye out for everyone still here and now that I can finally communicate with George my instant thought was to let him know. Flash disappeared over the back fence, looking as suspicious as ever, there's always trouble when he's around and as much as I wanted to instantly run off and find George I thought it would be better if I just watched his movements to try and ascertain what he was up to. 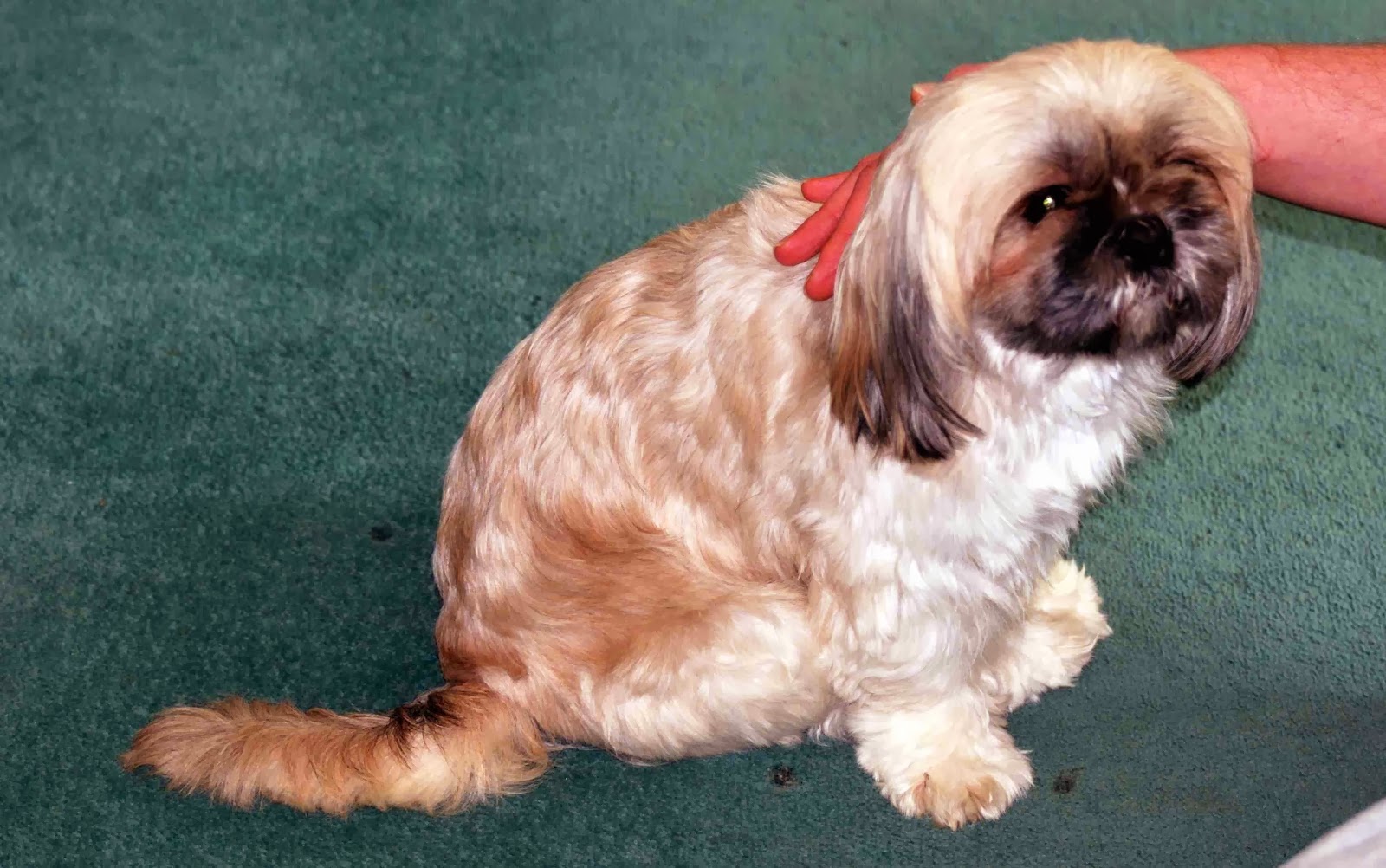 After he disappeared I ran up to the front window to see if George was about and caught sight of Disappears Daddy talking to River telling her that some special visitors were going to come and see her today. He was doing his best to try and smarten her up, although she's a pretty little thing she's a bit of a tomboy as well and trying to keep her neat is a mammoth task in itself! 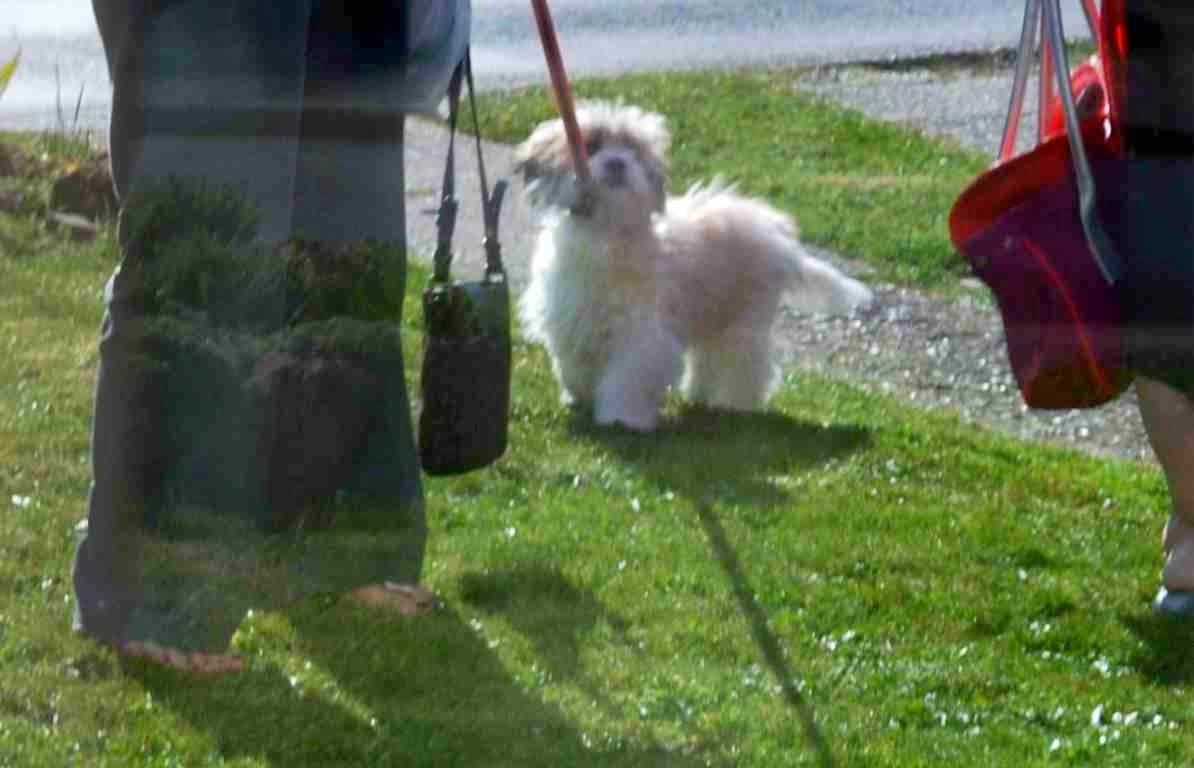 Not long after a car drew up and I saw the Daddymummy get out and there was another lady and a dog with her. I'd never seen this dog before but she looked small enough not to be too much trouble. 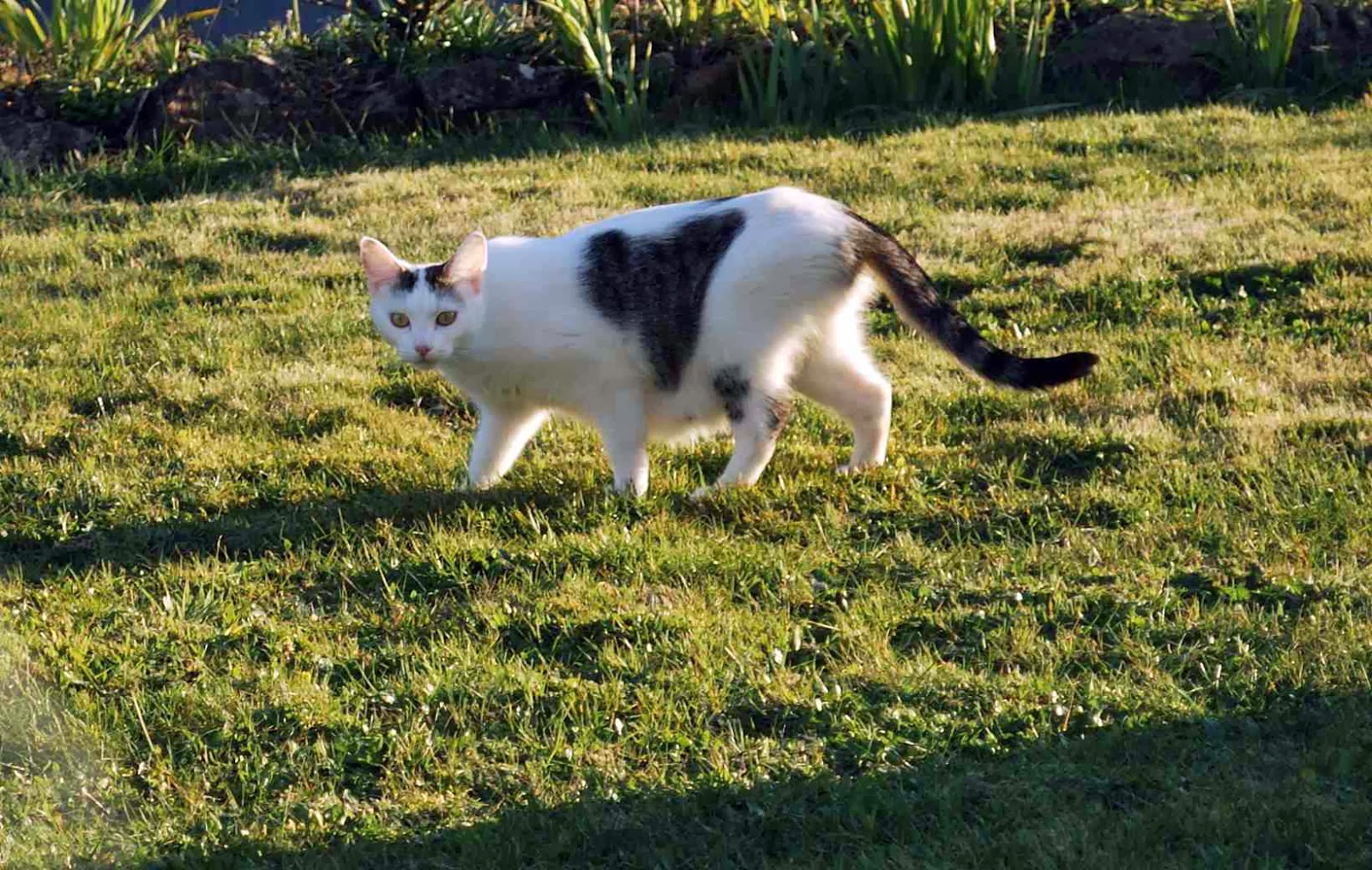 I wasn't the only one who spotted her arriving, the lighter Naughty Twin ran over the road to have a nose in.
In they all came, the Daddymummy, her friend S and the little dog, Izzy. 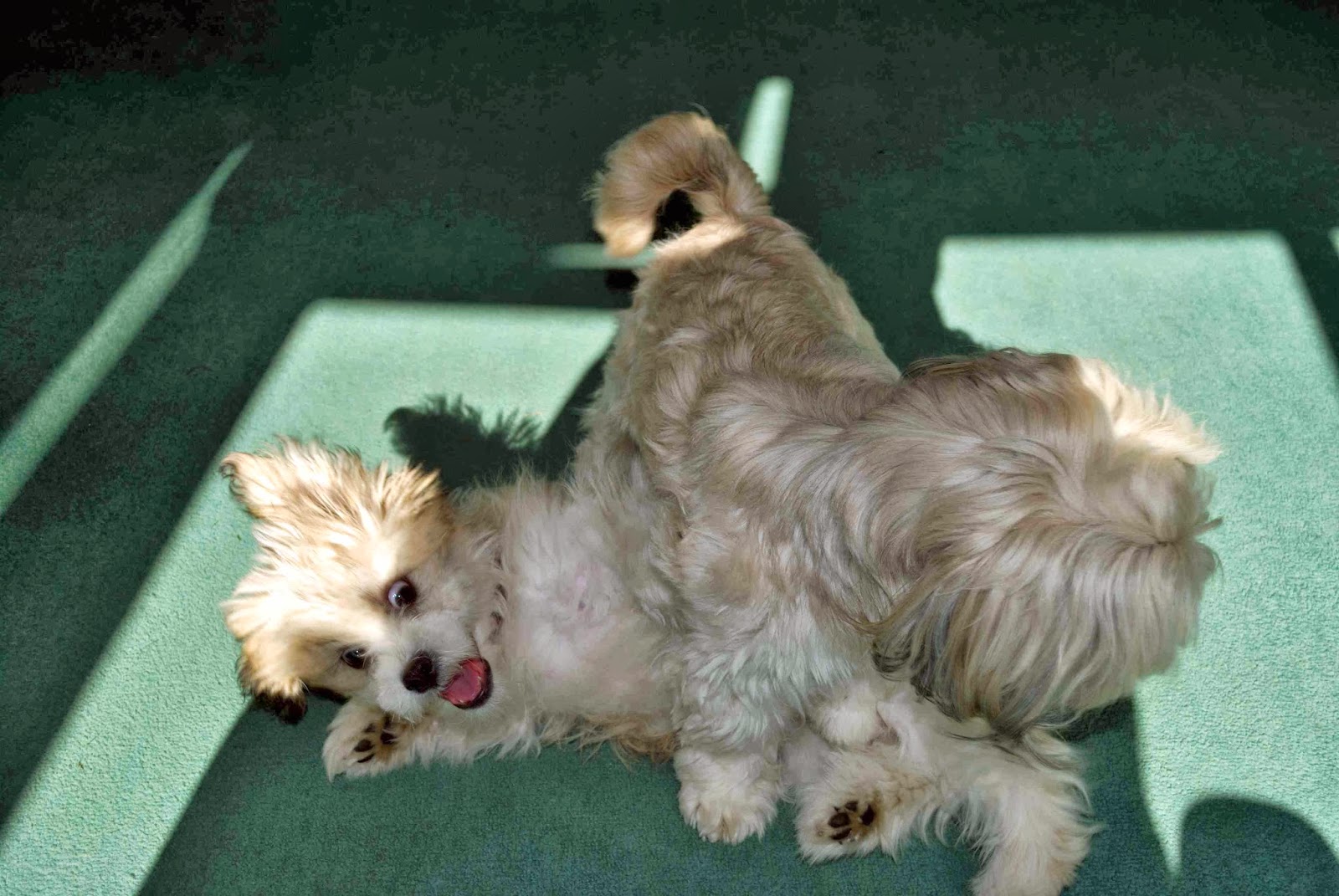 River, never one to stand on ceremony instantly jumped on her and started trying to ride her back, Izzy didn't seem to mind much and joined in, once she got past the initial surprise!
I just sat next to Stay Daddy in the window watching all that was going on while keeping an eye out for George to tell him all about what I'd seen Flash up to but no sign of him so when they went outside I thought I would join them. There's no point in staying inside on my own on such a lovely day like today. 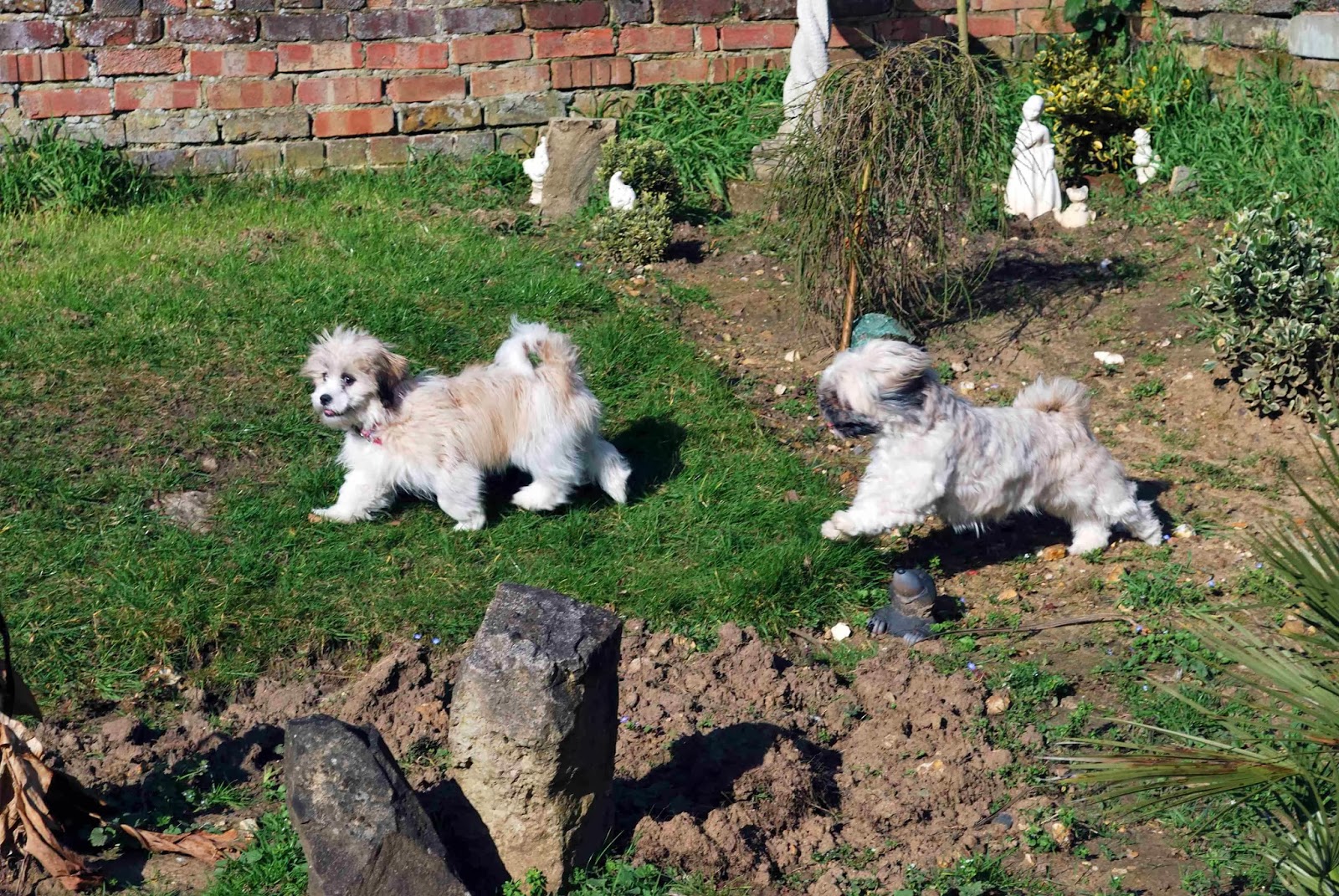 Round and round the garden they ran, like old friends. That's the thing with River she always makes everyone feel very welcome and special straight away, one of her more endearing qualities. 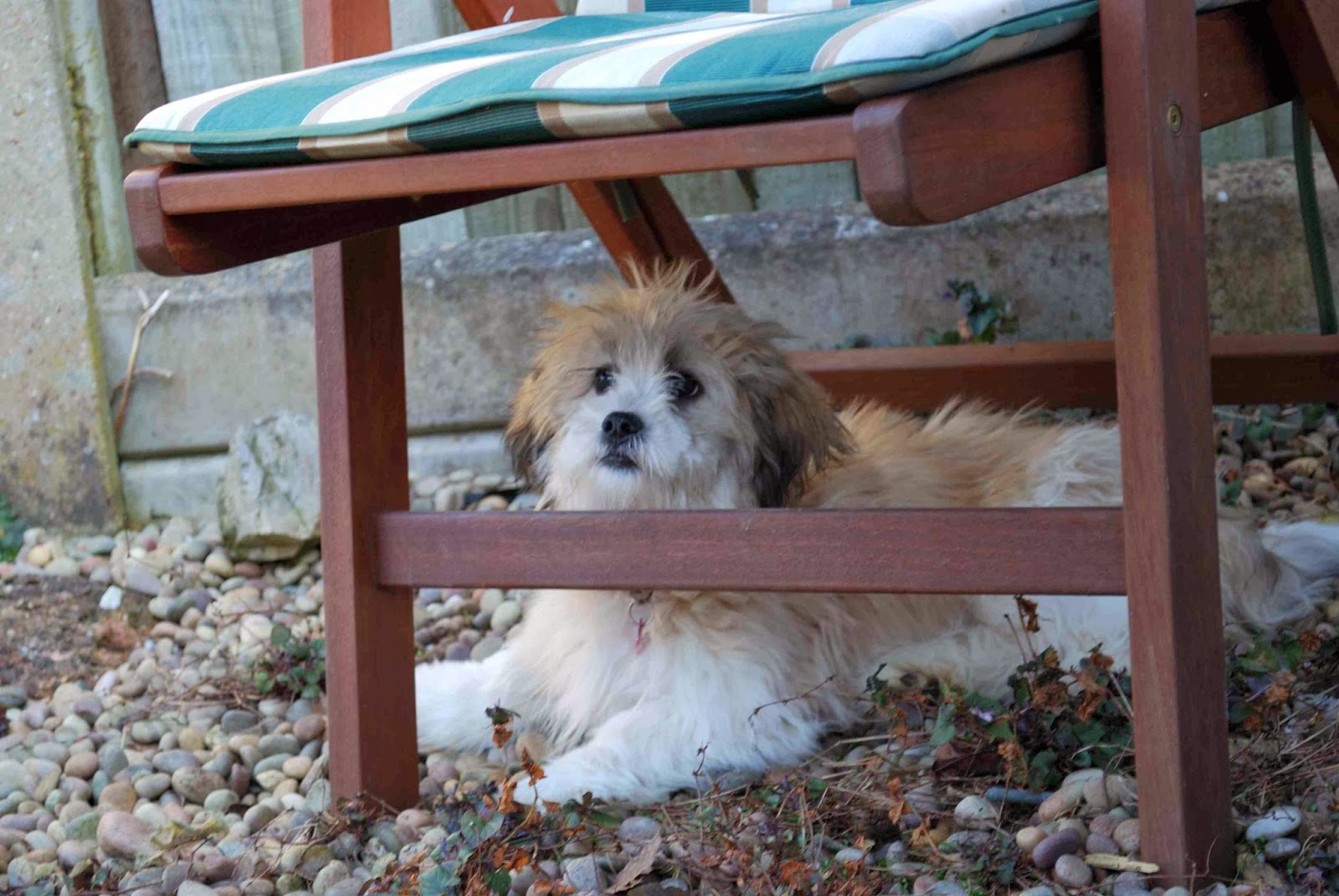 When everyone stopped for lunch I decided to sneak up on Izzy to get a closer look. I've only really got River as a point of reference when it comes to dog, oh yes and Twevor but then again he's a rather special dog and everyone loves Twevor! 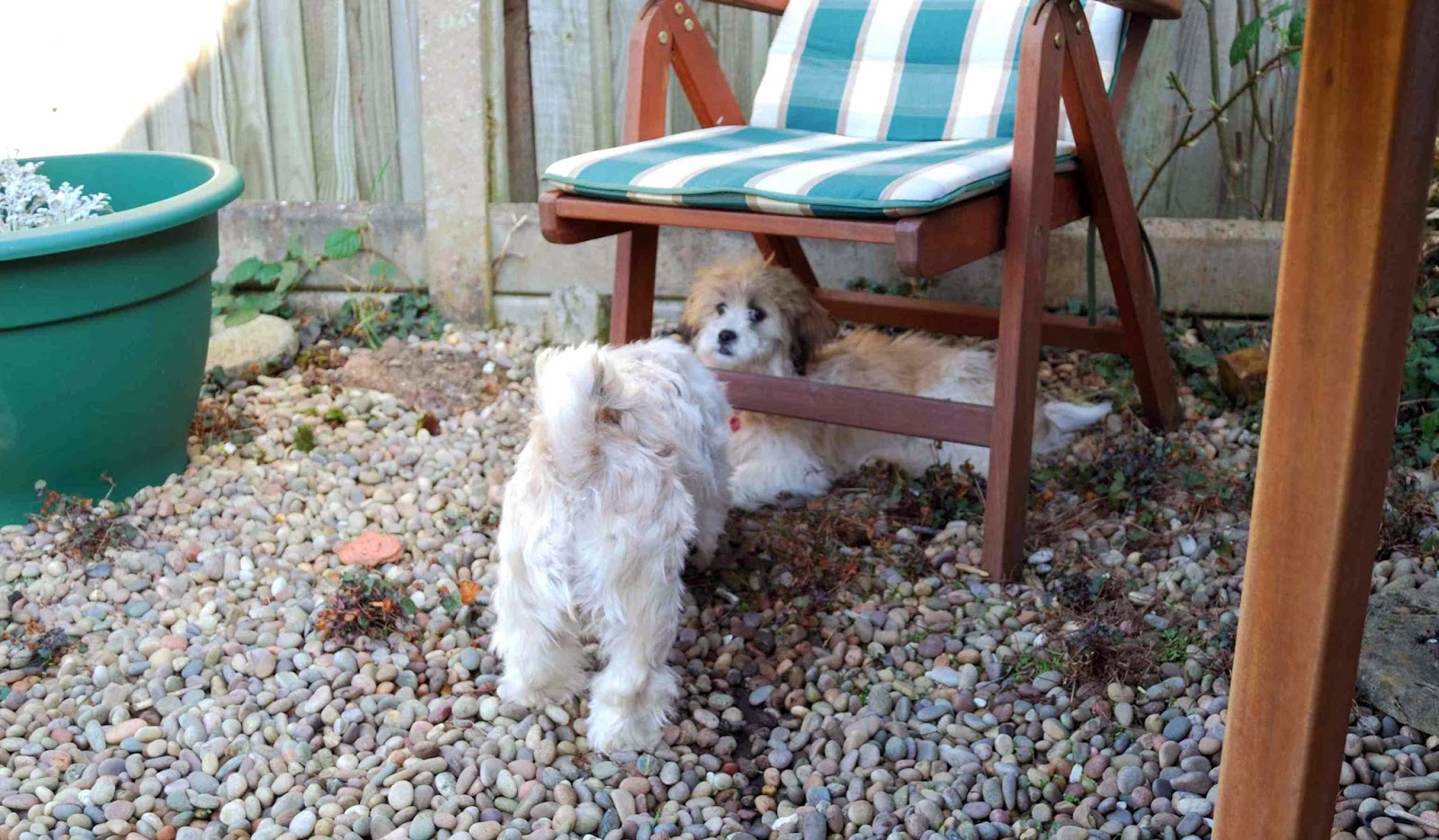 I must admit she was very sweet, a little younger than River, I'm sure I heard S say that she was about 6 months old and so was new to their family. Bless her she must have been so tired out all that running around that she sought refuge under the Daddymummies chair.

But not for long, River had a play mate and she wasn't going to waste much time in rest and started to chase her around the garden again. Still I approve, she seems like she could be a good influence on River, calming influence I mean. 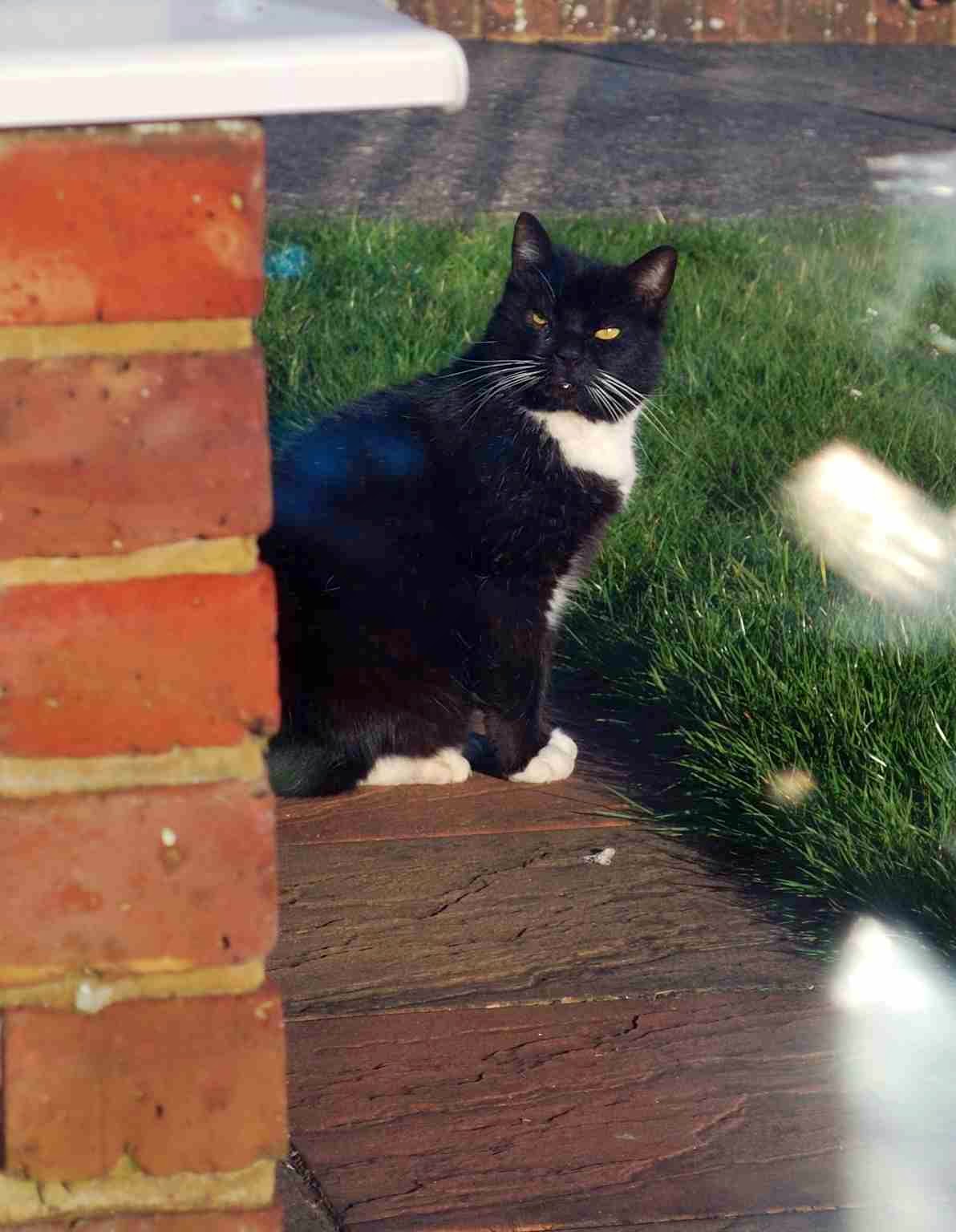 I thought I'd head back in, a couple of hours had surpassed and maybe George was around, it was a beautiful day after all and most cats of Catworld love a play out in the sun.

Yes fantastic, there he was waiting for me by the time I got to the window. I started to tell him about Flash and what I had seen but got interrupted when everyone came in and River and Izzy spotted him. 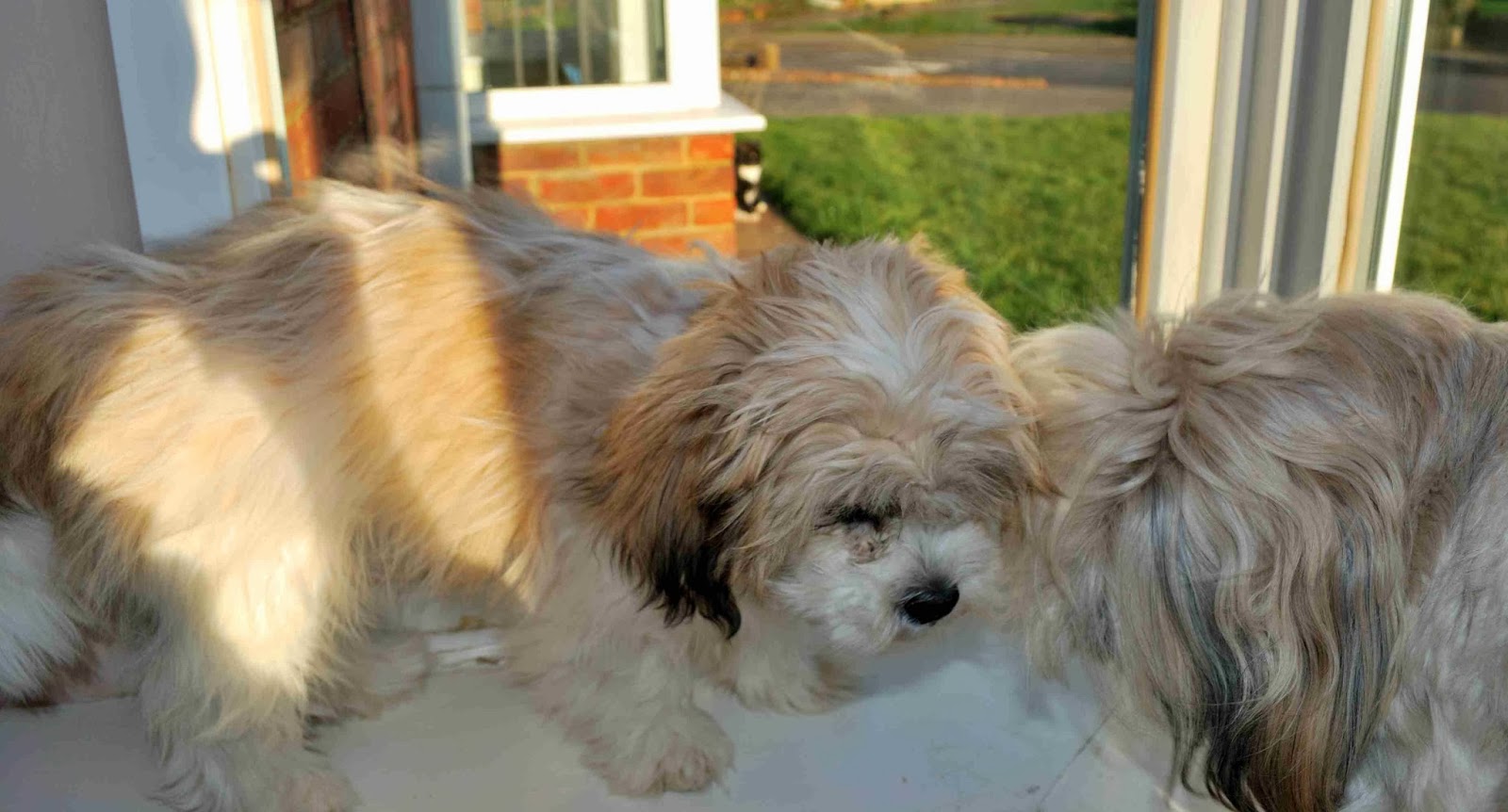 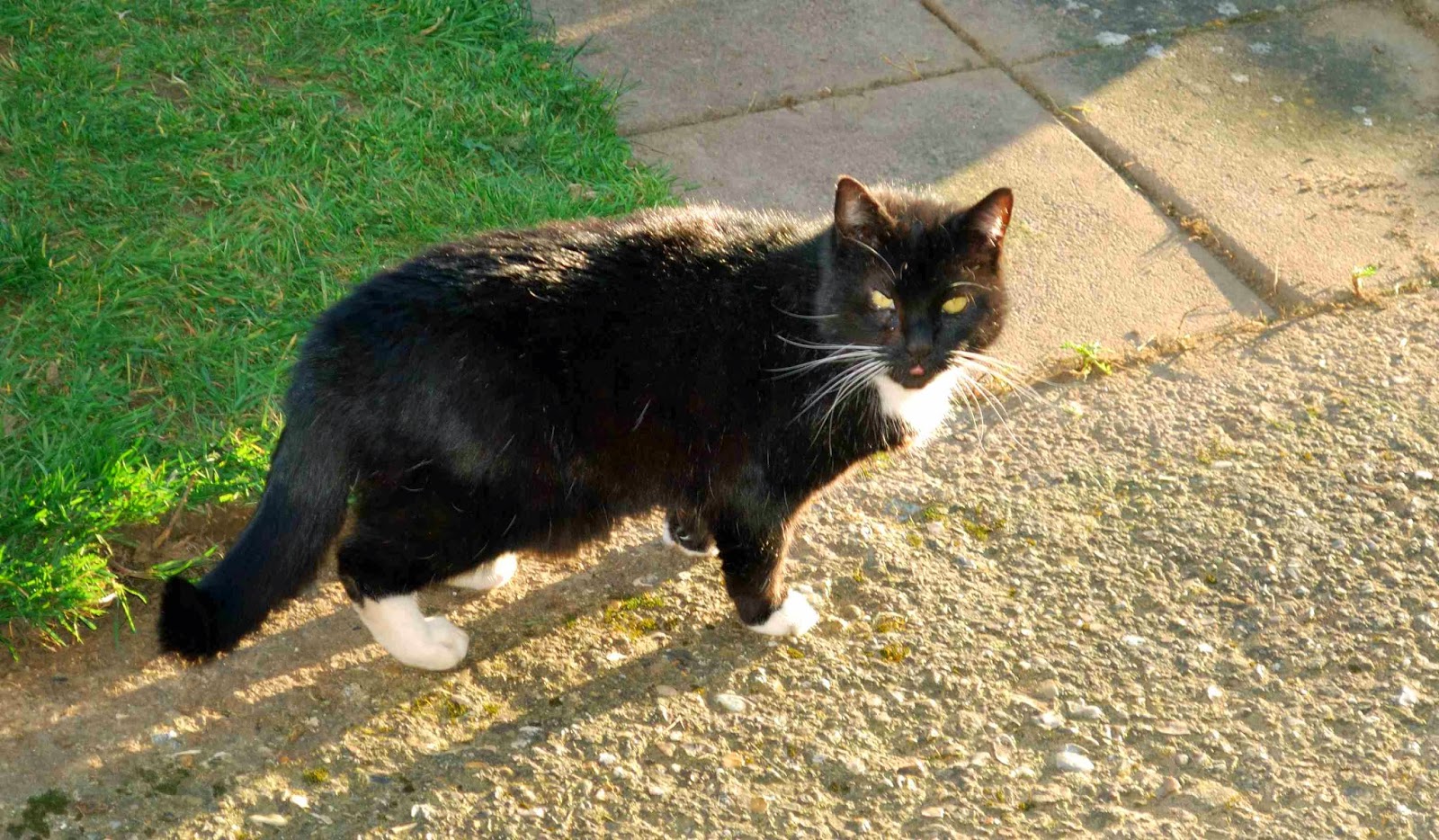 Luckily Stay Daddy spotted him too and opened the door and laid out a few Dreamies for him to enjoy. He said he would go over straight away and pass the news on and true to his word that's exactly what he did, heading straight over to see Mogsie.
M and R came out, probably to get a bit of a tan themselves, and spotted them talking so to divert attention George and Mogsie pretended to square up to each other as if to start having a fight. Twizzle was with then and stepped in to break up the pretend fight but I'm sure George must have let her know what was going on too. I can hardly wait for tomorrow to find out from George what Mogsie said about the situation. I do miss talking to him but I'm still not ready to reveal all to the rest of Catworld yet. 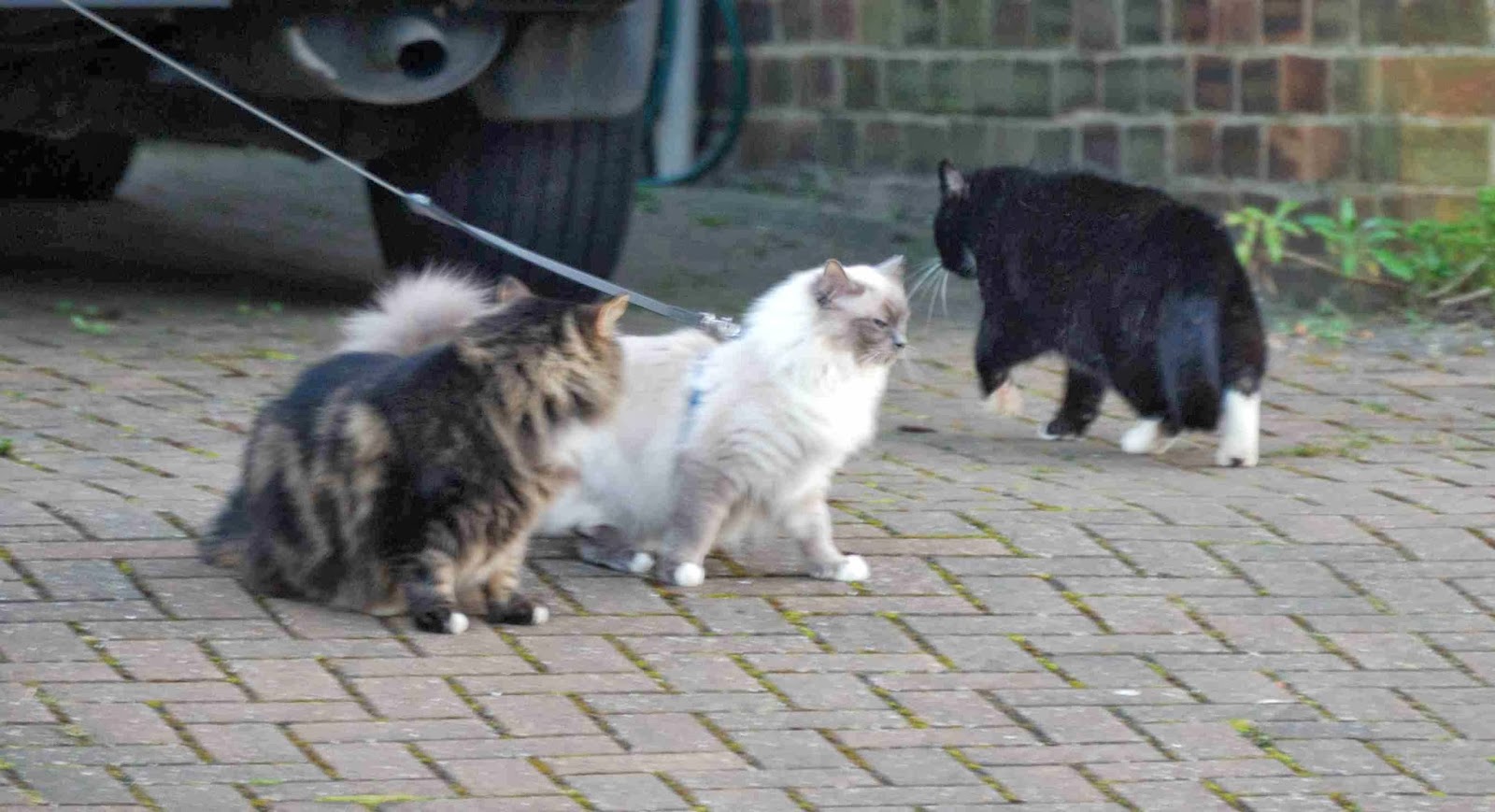 Cats and Dogs - From The Other Side
www.riverssong.net/2014/03/my-special-visitors.html