A Bit Of A Quandary 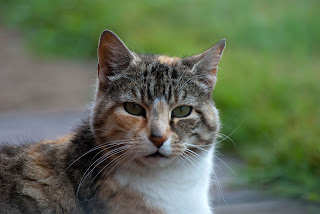 I seem to be in a bit of a quandary.

Recently I've been having tentative contact with the rest of Catworld. Some of this to do with the trouble we've been having from the intruders and some of it because I've been listening to what the daddies have been saying about needing to integrate with the outside world a bit more.

I guess I have spent a fair amount of time isolating myself since Evie and Smokie went, but the trouble is getting a balance between being friendly and inviting over friendliness. 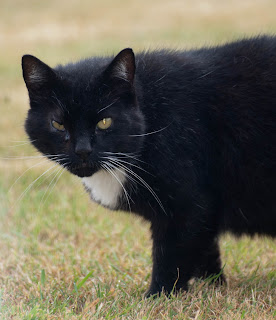 Emma's been calling by recently and although we don't say much I don't mind sitting near her just watching the world go by, we had a nice little sit this morning and I'm coming around to daddies way of thinking that she is actually a nice girl.

George also dropped by and although I'm still being a bit standoffish with him I do worry about his eye, it's still weeping. He's not wearing the eye patch I left out but I guess that's his choice.

The problem at the moment seems to be lying with the Naughty Twins. As daddy was unloading the car this morning with all the bags the darker one actually tried to come in the open front door. Daddy called him before he got too close so I didn't have to deal with it myself but there's been a few times recently when one or other of them have tried to enter and this is not something I wish to encourage.

So now you seem my dilemma, I really don't want my friendliness to be misconstrued as an open invitation to come on in.