Emma & The Hound From Hell 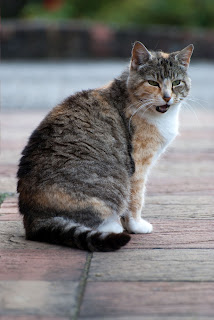 Emma's just called by for an early morning chat. Now this is something that I don't usually partake in and not something that I'm going to be encouraging. The mornings are mine and I don't want them intruded upon. I know I've been a bit more sociable recently but this integration is all new to me so I just sat there and listened.

She told me that she's been spending a fair bit of time down the side of my house, which is probably why I haven't seen her much recently as I very rarely venture that way. She said that there was a Doberman sighting last night about 10pm, walking down the road on a lead with his daddy. He seemed to be behaving himself but she was a little frightened he was massive, she said he looked like a hound from hell.

Glad to see that a lead has been brought into the equation. I think the immediate crisis with that problem seems to have subsided now, although I've learn't with our other problem not to be too complacent.

Neither of us mentioned the pregnancy rumours I recently started, think it's best that way. I know she's due an apology but to be honest I'm just a bit embarrassed about it all really and don't know how to broach the subject.