I've just had a lovely sleep and bingo, woke up to movement, a fur ball on it's way. The daddies prefer me to go outside when this occurs but it's not always possible. I never get told off if there is an accident inside though. The daddies have both had fur ball type incidents in the past which I think must contribute to their relaxed attitude when it happens to me. Although disappears daddy lives up to his name when it does occur.

Look what I found when I went outside. A bit of Foxy Lectar's fur.

I think it's a bit of his tale. It might be the tip but I can't be sure. What on earth is his game now?  It defiantly wasn't there yesterday as I went outside about 11 to look at the stars and cool down so it's happened since then. I ran and got daddy who has put it in a jar. Dunno why as it's not like a rabbits foot, which is not lucky in any case, just a bit gross.

I've whittled it down to a couple of theories.

He may have been in a scrape although it must have been a silent one as I didn't hear any fighting last night. He might have had an accident and it just dropped off, which if this is the case I do feel a bit sorry for him. However, that's better than the alternative, that he has he now gone so completely mad that he's into self-mutilation, scattering body parts in his wake. If it's just a calling card it's a bit extreme. If it's meant to freak me out, it was successful. 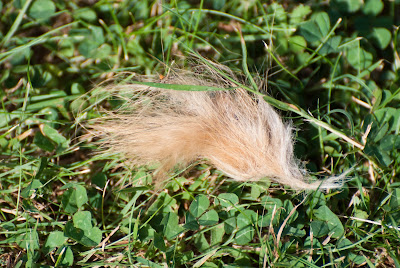