One of the daddies parents have come over to visit them today.  I always enjoy their visits it's a chance for me to have a bit of fun.

The Daddymummy always calls me to go over and get a stroke and just like with The Girl I ignore her, this never puts her off though.  I shall have some fun with that little trick later.

My second lump of fun is with the Daddydaddy. Now I have been informed that he's not particularly partial to us cats, what's all that crap about, so I take great delight in rubbing up against him. However his response is different to that of The Boy. When I do that to him I get a big stroke, with the Daddydaddy I just get blanked and a growning kinda of noise. Still I like trying to wind him up, the best fun to be had is just when he's a bit tired. *Giggles*

Three minutes after they arrived Mogsie appeared. He seems to be standing guard on their car. I can only think he's heard a rumour that there could be an attack on it from the Naughty Twins or someone as he's peering intently down their way. He does look after me. 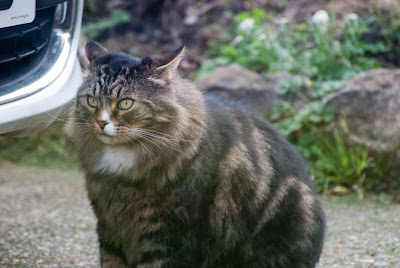