One & A Half Drama's

Thought I'd just spotted a Foxy daily-light outing, a very rare thing, it would mean he was upping his game. I'd heard a rumour that he lived in a garden on the other side of the road and my blood was pumping as I just caught a tale going behind a bush in that direction. I went out onto the office window ledge to get a better look, even daddy looked up from his phone call. Turned out to be a meandering George.

I think I just got all caught up in the drama by the excited pitch of daddies voice as he was on the phone to disappears through the day daddy. I don't know what's  occurred but something to do with four steps, an elbow and being underground in a rabbit hole. I think I might have got that last bit a little bit wrong as rabbit holes are quite small but it all sounded very exciting. 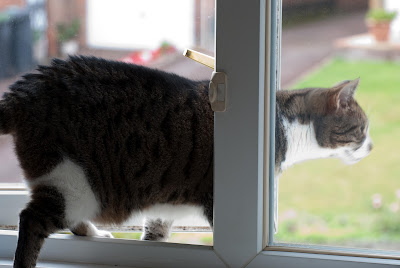