The Game of Truth Begins

What do you mean we're already playing? I shock my head to clear it.

The Curse lent forward leering over her crossed legs

Didn't you listen to me Lil' Cat I said Ok then, let's begin! Do I have to remind you again I've already said I've no time to waste, we started playing the game the moment I spoke?

What's this game we're playing, I should at least know it's name.

It's name little one is The Game of Truth! It's only fitting that we play the ultimate game for the ultimate prize, or...

The Curse touched her hair, wiping it from her face, licking her top lip, left to right.

A finger pointed directly at me.

The thing is Lil' Cat I've been playing it all along, you should listen to my words very carefully, I've already given you the outcome, poor Lil' Cat you sitting their all scared and brave, I already know the outcome and so do you if you've been listening carefully for I do not lie. There's only one rule, the first not to speak the truth loses and I'd like to remind you again, I NEVER LOSE!

My throat burnt indignity so that's the game we're playing;

I beg to differ.

The Curse smiled mockingly and nodded her head as if to indicate she was interested in hearing what I had as a defence.

You think you know us? You think you have all the answers but your forgetting you are not the only player in this game and I know me and I know what I am capable of and the truth, huh if that's the game then I know who'll the winner will be!

I heard a little sound of cheer coming from Doublay and turned to face him.

A double crosser. Is that what you think he is?

The Curse's head poked sideways, her chin sharply prodded down and bottom lip following it out.

Well I know Doubaly to be someone who chose to face great challenges to do what he thought was the right thing. I don't see the slightest hint of double crosser I see someone who fought his own instincts to sometimes live in great fear with great pose and restraint for the aid of others, a cat who forgives those who have done wrong against him and tries to help those not as strong as he is. And...

I nodded and smiled to Chameleon who's head slightly bowed looked both embarrassed and sad.

And YOUR TRAITOR. Nah got that one wrong again, I see someone who loyally followed someone who took advantage of him and yet when people who he'd been poisoned against most of his life asked for his help he chose to help them and brought the gift of co-operation between us and one of our greatest floes. No I see a negotiator and soon to be father who I've no doubt will teach his children great strength of body and mind.

The Curse was smiling at me now.

And I suppose you are going to tell me those two gender swapping brats are just little cheeky scamps?

They are so much more than that. The lighter Naughty Twin looks out for others, she stepped up when I went to the other side and took it upon herself to look out for River, with no cost to herself, she's proven over the years to be a good friend and excellent communicator while her brother over-came great fear and managed to beat your little attempt at removing his memory. I think you'll agree more, much more than just cheeky little scamps.

The Curse staring at me went to clear her throat but nothing came out and I continued.

Sarah a cheater maybe, but she's an excellent mother who would fight to the death for her children, protective personified. She's a cat and her foibles as we all do but when needed she's there and has more bravery in her than her size gives away.

I looked up to see The Curse looking over my shoulder, behind us on the path Sarah and The Naughty Twins had returned with Bella and George and they were all looking at me.

Bella's more bothered than you could even imagine, just because she keeps out of the direct line of action these days, pah, that means nothing. Bella has been a warrior on the front line of trouble more times that I care to count without question but now she works quietly in the background, helping and calming.

The side of Bella's mouth softened and she winked a wave at me. I blinked back and for a second we shared a union of emotion.

I turned and smiled openly at George, before turning back to face The Curse.

Turning back I pointed at George;

This man, this marvellous cat is a cat of amazing warmth, heart, love and trust. He's made mistakes and he's learnt from them, it's hard to accept responsibility and George does than, never shirking, always there and dependable and you choose to jump on the fact that he's heart got confused, no wonder the guys bursting full of love.

What about me? What do you think of me Lil';

Twizzles head was looking around the corner of the gate. Everyone turned him her direction surprised, she never comes out of her own.

You Twizzle, you've been my friend across the road. How I miss those days we would just sit in our windows looking at each other silently in tune.

I turned to face The Curse.

The Princess as you so like to label her has opened her home and heart to any who needed her love, compassion and protection in bouquets and you chose to call that kindness into question?

I was feeling out of breath, how strange to feel breath again.

Clap, clap, clap, The Curse slowly moved her hands together.

Lovely little speech my darling but I stand by what I say, I always tell the truth as you can see, I'm still here.

My eyes blazed at her a game of who would break the gaze first in play, but no, this was not that game. I softened my eyelids to indicate that battle was not going to be played and we broke gaze contact together.

George stepped by my side and touched my paw, I could feel him, really feel him like I used to feel fur on fur  and looked up into his face smiling down at me. His weepy eye needed a wipe and I moved my paw and gently cleaned it for him, lost in a moment broken by;

The Curse, cleared her throat, brought out a leg and cracked her angle before returning it to the crossed legged position.

And what about your hero, gonna tell me how he's still that. Yes I can see he's in the thick of the action.

Mogsie needs no defending by me, I thought we were speaking the truth, this is the Game of Truth after all, isn't it?

Mogsie is the one cat that we can always, always rely on to do the right thing. We may not know the reason why, but I've no doubt he has one for why he's not here now. You see...

I lent in towards the curse;

...that's why I'll win this game and you will loose, I've no doubt in a word I'm saying about anyone, least of all about Mogsie.

I pulled back and for a second caught the tendons in The Curses neck tense before a pair of eyes behind her drew my attention.

There was Mogsie looking back at me. 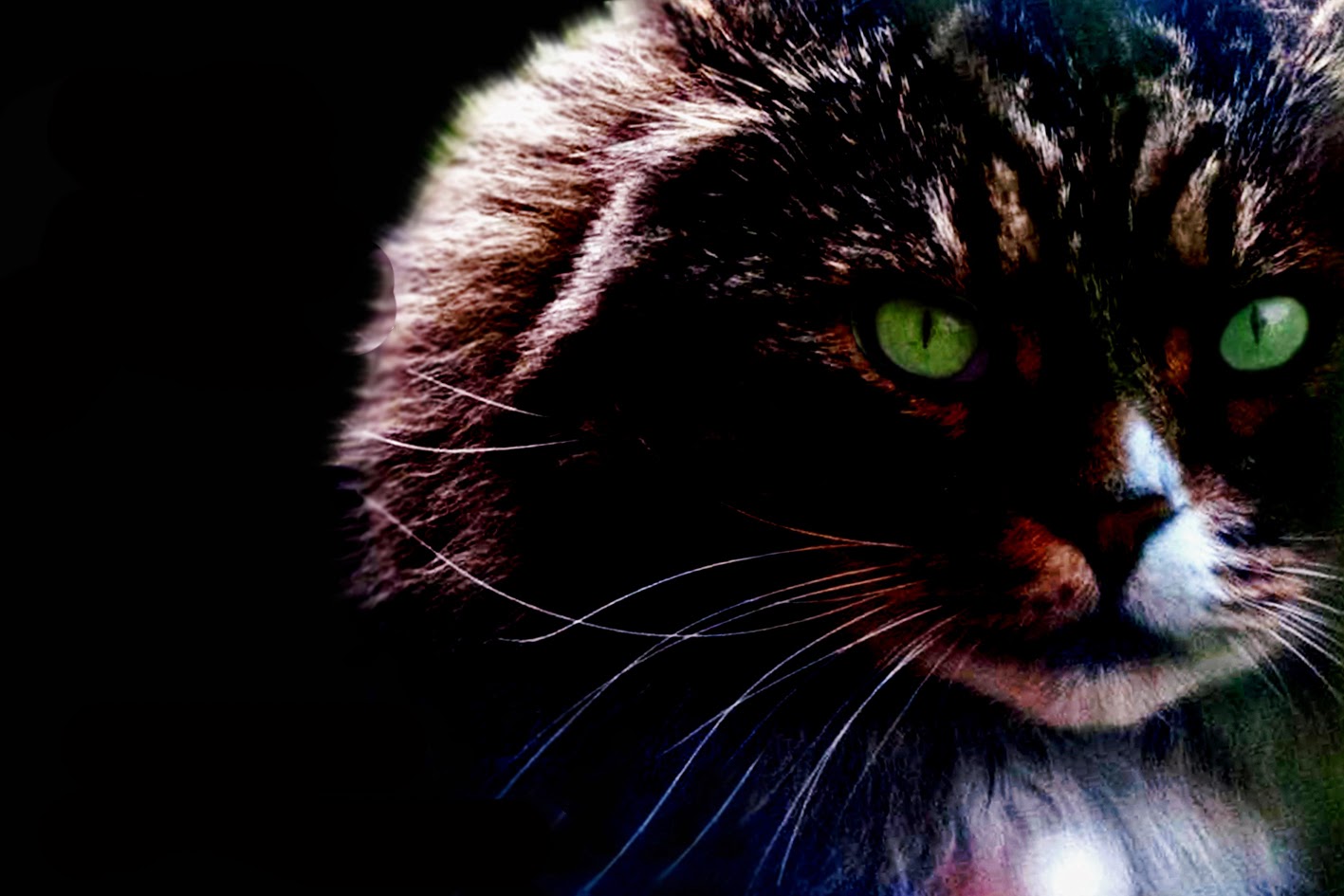