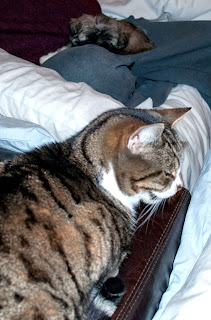 I've spent the evening getting closer and closer to the little dog, we're just 1 ft away now.

I've been thinking about this situation. It looks like she's not going anywhere and I've spent the last few days sussing her out and she doesn't appear to be a threat.

I've heard the daddies say that she can be quite feisty so I'll be keeping an eye out for any of that sort of behaviour. She'll be in for a shock if she thinks she can get away with that sort of thing with me. I learnt from Evie and I learnt well.

It's been great hanging out with the daddies though. Almost like normal again.


Cats and Dogs - The Other Side