Guess it's change for all of us at the moment. 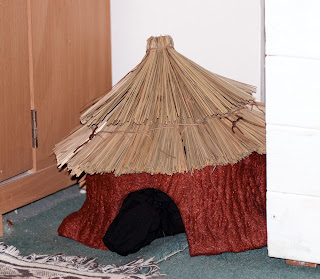 The daddies have been a little concerned that River will discover Nadia and disturb her in her long sleep. That little red box Nadia never really took to and is easily moved around with just a nudge of the nose. So the daddies have brought Nadia a new house to live in.

It's big enough for her to get in and out of quickly and can be used during the Summer as well as the Winter. Liking the style, very tropical.

They've strategically placed in near the back door where it's colder so it will keep her at the right temperature during her sleep. It's also placed half way between her home in the back of the fridge and the hiding gap under the fireplace. Clever thinking.